What She Saw At A McDonalds And Shared, You HAVE To See!

Compassion Has Not Gone Out Of Style

Usually articles with the hook “what she saw at this restaurant” make me a little nervous. But don’t worry. This is not some exposé about poor restaurant practices. In fact, it’s quite the opposite. Because what Chicago resident Destiny Carreno captured during a trip to McDonalds is something we pray will be put into practice all over.

Destiny had swung by McDonalds for a quick bite to eat. But what she wound up witnessing while waiting in line, she just knew she had to share. And so she did. She snapped the photo below and share it on Facebook. 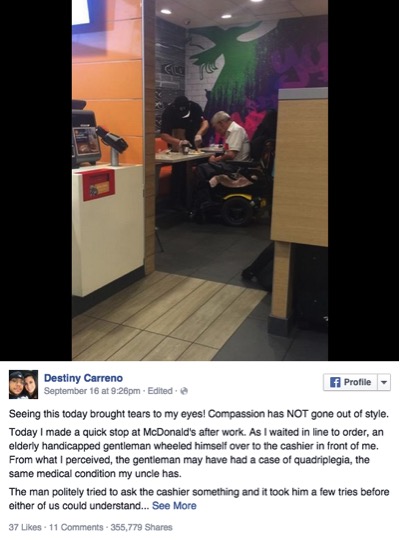 Her post has been shared over 350,000 times! In it, Destiny outlines the powerful scene that unfolded before her. She says,

“Seeing this today brought tears to my eyes! Compassion has NOT gone out of style.

Today I made a quick stop at McDonald's after work. As I waited in line to order, an elderly handicapped gentleman wheeled himself over to the cashier in front of me. From what I perceived, the gentleman may have had a case of quadriplegia, the same medical condition my uncle has.

The man politely tried to ask the cashier something and it took him a few tries before either of us could understand he was saying "Help me please". Neither of us knew what help he needed, and the cashier suggested a few things before he figured out the gentleman needed help cutting and eating his meal.

To be honest, I thought the cashier wasn't going to help, especially during rush hour in downtown Chicago, but to my shock, he shut down his register and disappeared from view....

Not to get away from helping him, but to wash his hands and put gloves on! I had to stick around and see how this would play out, especially since it hit me so close to home with my own uncle.

The cashier came out from the kitchen, sat down, and began cutting the man's meal and helped him eat.

At that point, the tears started to gather in my eyes. My heart was so appreciative for what he did. I couldn't contain my emotions in the crowded restaurant.

This employee, who put everything on hold for this man, went above and beyond his responsibilities to help this handicapped customer out. That was the kindest and most humble thing I had ever seen.”

And I have to admit, reading Destiny’s post had me just as choked up as she describes herself as being. This is truly being the hands and feet of Jesus. It’s amazing how one small act -- just a few minutes out of this employee’s busy day -- carried such a tremendous impact. What is God calling you to do for someone today?

Here's another great stroy about a Hardee's employee's act of kindness for an elderly woman. 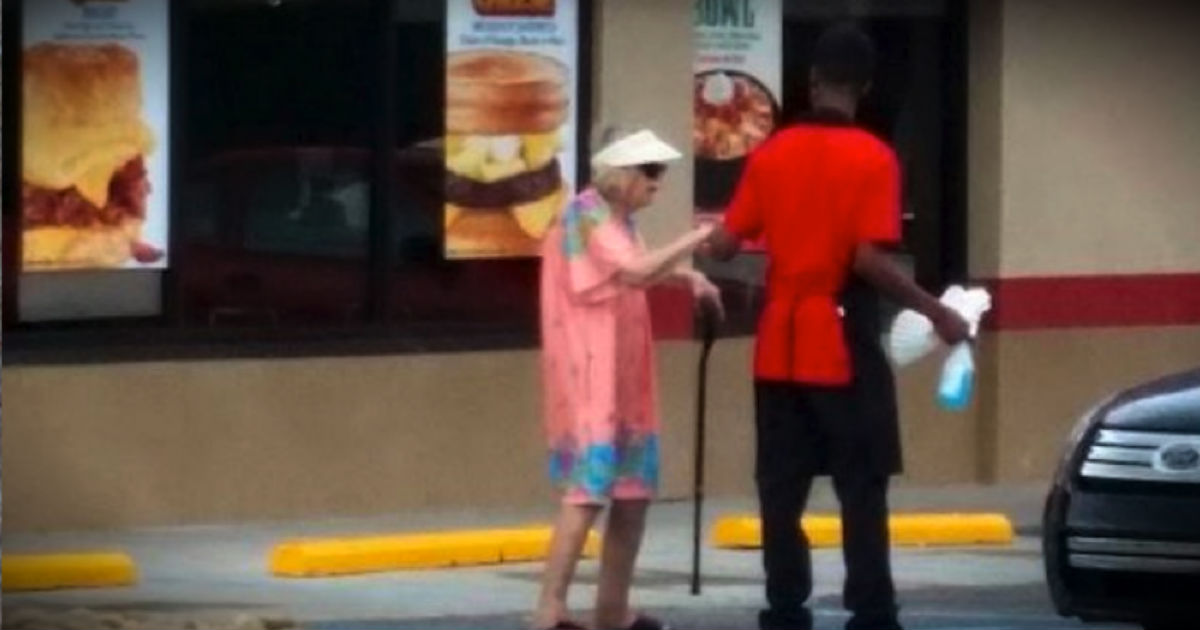