Sam Berns wasn't like any other boy. He was 17 and he had an disease known as progeria, that causes people to age prematurely.

Progeria affects approximately one in every 4-8 million infants. But, there are only about 200 children living with the disease worldwide. The genetic mutation tied to it causes those with the disease to produce a protein, called progerin, that blocks normal cell function.

"Even though I have many obstacles in my life, I don't want people to feel bad for me," Sam said during his TED talk. 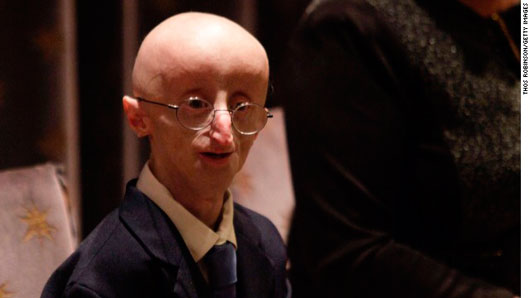 Sam's outlook on life is downright inspirational. He had to face challanges no one else could even dream of. As children with progeria age rapidly, they suffer from a loss of body fat and hair and an inability to gain weight. But, that didn't keep Sam down!

"All in all, I don't waste energy feeling bad for myself," Sam said. "I surround myself with people that I want to be with. And I keep moving forward."

This boy from Boston was so amazing, celebrities and athletes wanted to take him under their wing. In fact, one of his favorite teams, the New England Patriots, wanted to make Sam their honorary captain during a major playoff game.

However, it just wasn't meant to be. Sam passed away before he had a chance to stand next to his team. But the team held a moment of silence before the game to remember their favorite star, Sam.

Sam's incredible outlook, and his profound effect on others, is hard to forget. He was presented with so many challenges in life but he wasn't afraid to face them.

We should all try to be more like Sam. Surround ourselves with positive people, love them like crazy and always move forward.