A Little Boy Sneaks Away and Witnesses the Crucifixion of Christ - This is Such an Eye-Opener!

This morning I woke up and a dark thought came over me as I got out of bed to meet my father and mother for breakfast. My father saw the distraught look on my face as I walked to the dining table to meet them and he asked what was wrong. I wasn't able to give an answer so he said not to worry about it. Just then the servants came and brought the food. Every morning it was the same breakfast. I tried my best to ignore the feeling as I picked up my fork to eat. I started to stab at my food and my mind got away from me for a minute. "Please eat your food son." My father said, so my mind returned and I started to eat. 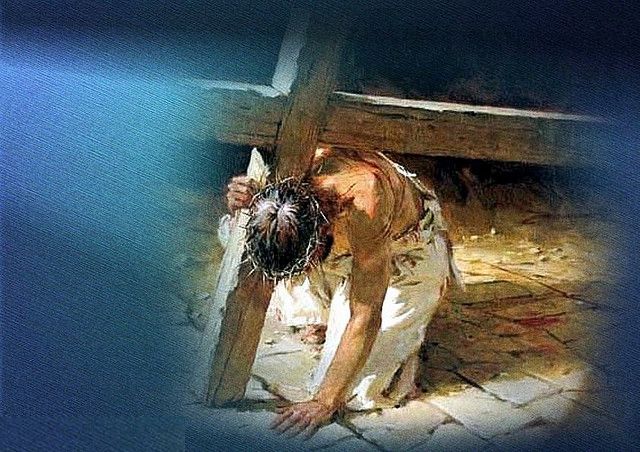 After breakfast I heard my friend call me and I went off to play with him for a while. I had told him about the strange feeling I had when I woke this morning. He felt bad and tried to help me ignore the feeling by playing some ball out in the dusty street. We played for a little bit but not long because the sun was shining and we got hot so we looked for a shady spot under a tree to cool off. I rested on the tree and took a nap.

About an hour went by and I was suddenly awakened by the shouting of people and I saw that the whole street was filled with what seemed to be like an angry mob. I ran with my friend to see what this was all about. As I ran, I felt a huge knot build in the pit of my stomach. It was hot and windy and dusty so I covered my mouth to avoid getting it in my lungs. I caught up to the crowd and found a spot where we could both see through. I looked through the crowd and saw a man standing in the middle of the court yard, my court yard. "This can't be good," my friend said. Just then I remembered the rule that my father gave me. Whenever there was a trial in session, to not be around. But this time my curiosity got the best of me so I whispered to my friend and we both ran to a tree to hide and also see the trial.

I saw my dad standing at the top of the steps with guards - there were at least four of them - two on the bottom and two standing next to him on the top. He asked about the man and why he was needed here. Just then I heard yelling from the crowd, "He claims to be the Son of God!" Someone else yelled, "He is a thief!"

My eyes got bigger and bigger as I heard the things they were saying about this man. My dad, however, took this matter into his own hands. He hushed the crowd, and said he found no fault in Him, that He is just a crazy confused man. Then the crowd became louder. Again he had to hush the crowd and he looked at the man and told Him he needed to talk to Him one on one. So the man went up. My curiosity became greater and greater and the knot in the pit of my stomach became tighter. I thought I was going to pass out or something so I grabbed tighter to the branch.

Finally, after what seemed like forever, my dad came out with the man and he again said, "I found no fault in this man!" There was a rule. So he had to follow it. He gave a choice. Barabbas who was the ugliest man, a murderer and who knows what else, was able to be freed.

"Who shall I free? Barabbas or this Jesus, who I find no fault in!" my dad yelled to the crowd. The crowd began to chant, "Give us Barabbas! Give us Barabbas!" I gulped at the thought that my father would let this happen and I began to shake. "What shall I do with this Jesus then?" I heard my father ask.

"CRUCIFY HIM! CRUCIFY HIM!" the crowd yelled back. I almost fell out of the tree when I heard the reply from the crowd. My friend and I looked at each other with the same look. We knew what each other was thinking in that moment. I saw my dad wash his hands and come back saying, "His blood is now on your hands." And he ordered the men to do what the crowd said. Then my dad walked away.

I waited until the crowd was gone and the men brought Jesus away to be whipped and beaten. I then jumped from the tree and ran up the steps and peaked in on my father and mother who were discussing what just happened. I heard my mother saying that she had a strange dream about something like this happening. Just then I remembered the thought that came over me and this knot in the pit of my stomach. I thought to myself as I walked away, maybe it was there for that reason.

A little later, I was outside playing with my friend again and I saw the crowd coming through on the street. There was laughing and swearing. I ran to see what was going on again. I couldn’t see it so I ran up the tree again as fast as I could. I saw in the middle of the crowd, a man so badly beaten carrying a wooden cross over his shoulder; the cross looked like it weighed a ton. He had some kind of crown with what seemed to be made of a twine of thorns on his head. Off in the distance was a hill. I thought that’s where they may be taking this man. I ran to catch up with the crowd. I got in between the legs of these people and got in the middle to see the man up close. It was Jesus! I could barely recognize Him. I saw the people around me spitting on Him and calling Him names. I walked along with the crowd and at one moment He tripped and fell on his knees. "Get back up! Get back up!" they angrily yelled at Him. I saw a man come from the crowd and offer to take the cross up for Him. I couldn’t believe what I was doing while I ran up to Jesus and tried to help Him up. Just then He looked up at me and I felt His shaking body against mine. After He was up, someone grabbed my shoulder from behind and I was thrown back into the crowd.

Finally, we all made it to the hill where I saw two other men being nailed to the crosses screaming in pain. One cried for mercy and the other was cursing out the men. I couldn't bear the sight of it so I turned away. I went off to find my friend to tell him what had been going on. He couldn't believe what I was telling him so we both ran up to see. Just then I saw another man being laid to the ground on a cross. The guards pushed everyone away so we couldn't get close. But there was something about the third man being nailed to His cross. He didn't scream out for mercy from the men like the two thieves had been doing. It was as if He knew this was supposed to be done. I couldn't see His face until they lifted the cross up and this man was placed in the middle. Just then I saw a sign which was nailed at the top near the man's head. ‘KING OF THE JEWS’ is what it read. I suddenly realized it was Jesus! Only because of what I heard from the crowd of snares. I heard a voice so I looked up to match it with the man. It was Jesus saying, "Father forgive them for they do not know what they are doing." I still did not know who this Jesus was. But my eyes were still on Him and His eyes caught mine. It was like He was asking on my behalf.

I saw the two thieves taunting Him saying, "If you are who you claim to be, save yourself and us!" One thief kept at it for a while. But something happened. The other thief started yelling at the other, saying something about this man not deserving this punishment. He asked Jesus if He could remember him. And Jesus promised him that he would be with Him in paradise.

Again I heard Jesus say, "Father into your hands I commit my spirit," and then He died.

Luke 23:47 When the captain of the Roman soldiers handling the executions saw what had happened, he praised God and said, "Surely this man was innocent. "

You can read the entire Good Friday Story Here