Dean Sparks had no idea when he bought a rusted old 1959 Chevy, that he was buying a piece of history.  Family history.

The blue 1959 Chevy Bel-Air was by anyone’s definition, a clunker.  It didn’t have any special characteristics that would make it stand out. But something about the car spoke to Dean who bought the car at a Nebraska auction and had it towed back home to Indiana.  He had no idea that the car held secrets that were priceless. 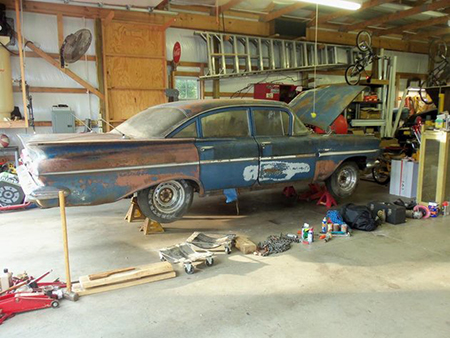 "I started taking things apart, and it still had a lot of old stuff in it," he recalled.

He found everything from spare tires, a child’s chair, patent leather shoes and antique glass juicers. But upon further digging, there was one item - far more delicate than the rest - that caught Dean’s eye.

"I unbolted the front seat and drug it out," Dean explained. "And when I looked back in under the driver seat, there was this letter. It was in an envelope with water damage.

Dean carefully opened the delicate old letter, which was "like tissue paper from age," and revealed a single sheet of lined paper dated Feb. 7, 1963.

The letter began with the author, Beverly, saying how much she missed Ronnie Waterbury, but it was the ending that made this letter so special.

"It said, 'Let's get married.' She had even underlined it," Dean explained. 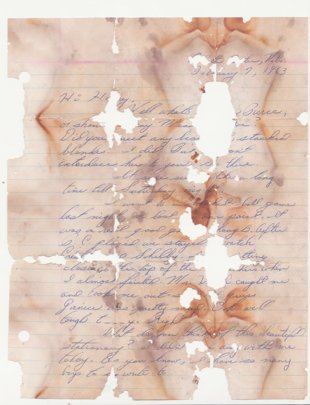 The letter was miraculously intact after years in the elements, and it survived the 800-mile journey, jostling on rusted out floorboards. The last step for Dean was to return the letter to its rightful owner.

After a bit of online research, Dean and his wife found Wade Waterbury, the son of the couple from the handwritten love letter.

Dean explained that he’d found a letter from Wade’s parents before they were ever married and the reply was stunned silence.

"It was very, very emotional for me," Wade explained of hearing Dean’s shocking discovery. "I lost my parents and it brought back so many memories. It was just like a flash." 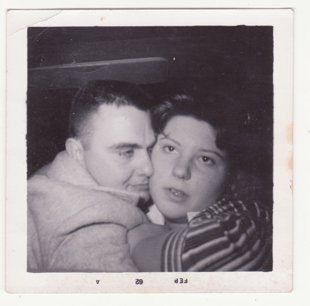 Dean explained that even though he bought the car and its contents, he really wanted to return the letter. "I was floored," said Wade. "Who else would even think about returning it to me? Everybody would just say, 'Oh, here's a letter, and throw it in the trash."

Dean packed up the delicate letter, surrounding it with cushioning Styrofoam and a large box, and shipped it to Wade, who eventually brought himself to read the sentimental love letter.

"At the letter's end, my mom wrote, 'Let's get married,'" Waterbury said. "And they did, a couple months later, right after high school."

And guess what the sweethearts drove to get married?

"They eloped in the same car where Dean found the letter," said Wade.

"You know," he said, "You think about things after your parents pass, if you had one more day or one more minute with your parents, and Dean provided me with that. He gave me another look into their life.

"That's a very important minute to get back."

Wade is having his mom’s special letter framed to hand in his home.  And Dean is planning on restoring the lovebirds’ car, and driving it to visit Wade so he can take a spin his parents’ car for one last spin.

We thank God for kind people who would go out of their way for others.  Sometimes, acts of kindness can seem so small, but they could have a huge impact on someone's life.