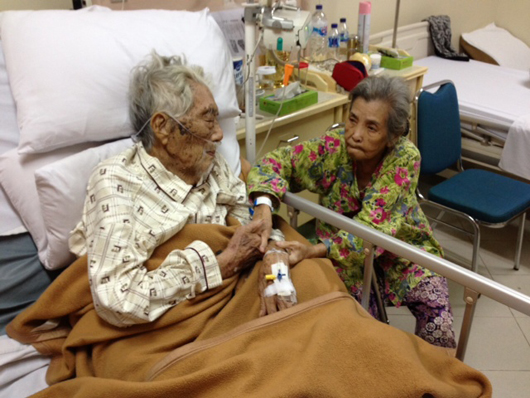 In the touching picture above, you can see a couple that have been deeply in love and together for 70 YEARS. The grandson of the two people in the picture originally uploaded the photo.

"He went through the brutal Mao suppression," Justin Wijaya wrote online. "He survived the Japanese occupation. Survived the bombing of the British army in World War 2. Raised 5 children in full discrimination against communist Chinese. Even when he is sick, he refused hospital treatment because nobody will take care of my ill grandmother."

This is a time and country where 50% of marriages fail. It's touching to see true love still exists. This couple has been through so much together; good, bad, new and old. The key to marriage isn't romance, it's dedication and faith.

This is their love story, according to Justin:

"He is 95 years old and has been diagnosed with advanced stage leukaemia and lung cancer. Doctor has given him a few more months at best. My grandmother is 85 years old and she has been battling kidney failure, and multiple other health problem for the last 10 years.

His dedication to his wife and her well being is above all else including his own being. During the past 5 years, there were many occasions where he was sick. We would admit him to the hospital for him to receive treatment. After a few hours of treatment, in which he received a medical infusion, he would feel better and barged out of the bed and ask to go home. This happened many times in many years and we were confused why he would do so. At first we [thought] that he is just being the stubborn old man that he is. One time he [couldn't] breath and we [had] to rush him to the hospital, in which after two hours he [asked] to go home again. My mother broke down in tears and asked him why he wants to go home before he gets better. He answered softly, 'because your mother is at home alone and no one is taking care of her.'

This picture is very special to me because this is the first time he is in the hospital bed, sick, barely able to speak, with my grandmother at his side. Through out all of their 70 years together, it was always him standing by her side when she is sick. When she can't eat, he would try to sit by her side and feed her. When she doesn't have the strength to walk to the wash room, he would walk straight up with all his strength battling intense joint pains and walk her slowly to the wash room. When she was hospitalized, he would get up at 5 a.m. every day and visit her at the hospital.

Unfortunately my grandfather and old Chinese people are not very open towards speaking their feeling towards/about their loved one. As such he never told me a story about how they met, how much he loves her and how they got together. For me action speaks much louder than words and throughout the years the unconditional love he has given to my grandmother, his children and all his grand children are all the proof I need."

Every one of us could learn something from the deep love that this couple shares.