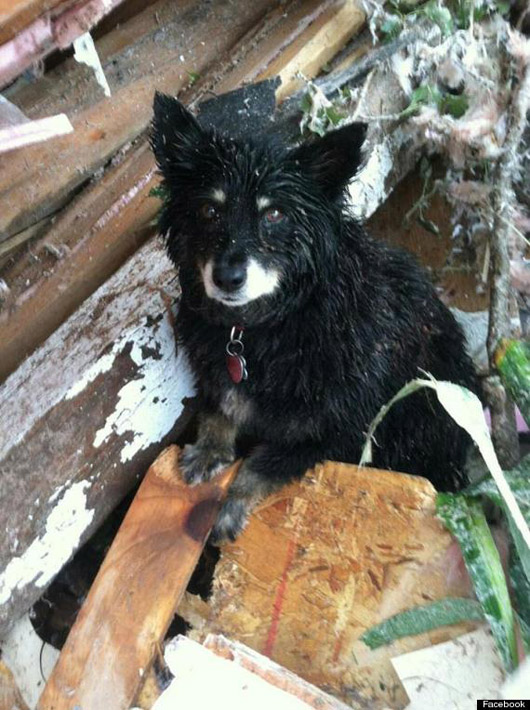 After the violent tornadoes tore through Moore, Oklahoma on Monday, rescue workers tirelessly searched for missing family members in the debris. Those family members just weren't people, though. They were also looking for beloved pets that were separated from their owners during the storm.

At the scene, one rescue worker took a photo of a frightened dog that survived the storm. The Oklahoma County Sheriff's office posted the photo to Facebook with the description, “Scared, but this little pup survived.” The photo went viral and received thousands of likes.

The sheriff's department originally believed the photo was a tragic scene; workers thought the dog was guarding the body of its deceased owner underneath all of the rubble. In response to the hundreds of offers online to adopt the dog, the department also tweeted, "Dog taken to shelter; deputy plans on adopting."

After the photo made its rounds on the internet, no one expected a miraculous happy ending! On the original Facebook post, a user left a comment that would change the destiny of the lost dog. Sheila Collins commented on the Facebook post, "Please don't adopt Susie Collins. She is my brother Curtis' dog and he is alive and the only reason he is not well is that he is looking for Susie. Please help us find Susie and if you have her, please let us know."

The sheriff's department replied on the photo, "Sheila we will definitely be in touch. We want to do everything possible to make sure this dog gets back to its family."

People thought the dog's owner passed away during the storms, but thanks to the Internet, Facebook and kind people online, she will be reunited with her owner soon enough.

We are so happy that both the dog and the owner are safe; we pray that other families can find happy endings like this one!