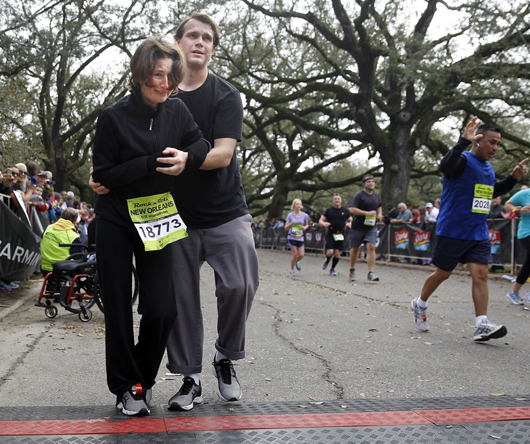 At the age of 35, Monique Koll was struck violently by a car when she was riding her bike. Paramedics and doctors were unsure if she'd survive.

The tragic accident severely damaged her spinal cord. Even three of her vertebrae were completely shattered.

But, because of sheer will and miraculous healing, four months later Monique was able to cross the finish line of the Rock 'N' Roll New Orleans Half-Marathon. She did it with help - but she was still able to do it when doctors thought she wouldn't live or would be completely paralyzed.

Her boyfriend, Nick Zaunbrecher, pushed her in a wheelchair for 13 miles. At the very end, he helped her stand and then cross the finish line on her own legs - a feat that was thought to be impossible only months before!

"I was crying," Koll told TODAY.com. "I thought I hid it from everybody, but then the cameras caught it. I didn't know how emotional it would be. Nick was amazing. He pushed that wheelchair over those crazy New Orleans streets for 13 miles. For him to be able to help me walk across the finish line, it was just crazy."