What a wonderful story about an owner of a Chick-Fil-A and his tender-hearted moment as a man in need entered his franchise. This story of kindness shown by a complete stranger will warm your soul.

Hebrews 13:2 says, "Do not forget to entertain strangers, for by so doing some people have entertained angels without knowing it."

Read on, you'll see what I mean.

It's been so cold in Birmingham, Alabama that they've had stuff shivering they didn't know could shake.

It was especially bitter on the afternoon of January 7th and a good many folks had taken shelter from the cold by grabbing lunch at the Chick-fil-A on Highway 280 in Inverness.

One of the diners who came in that day was a bit unkept. He was wearing jeans and a hoodie – hardly the kind of clothing for a day like that. Most folks just figured he was a homeless fellow.

The man first made eye contact with Mark Meadows, the owner of this Chick-fil-A.

"I was about to leave when this gentleman walked in the door," Mark told me. "I could tell he needed some help. We have people come in from time to time – so you kind of know."

And sure enough, Mark's instinct was correct.

"He asked if there was some work he could do so that he could get something to eat," he said.

Now, it would not be unusual for a person like that be escorted out of a restaurant. But the Chick-fil-A on Highway 280 is no ordinary restaurant. Last year, when a freak snowstorm hit the city, Meadows and his staff personally fed hundreds of motorists trapped in their cars – free of charge.

So instead of ordering the homeless man to leave, Mark invited him to have a meal. As the man waited for his chicken sandwich and waffle fries, Mark could not help but notice the man was rubbing his hands together.

"There's a look about somebody's hands that's been out in the cold," Mark said. "It's got that cold look about them."

The man did not have a pair of gloves. So Mark gave him his.

"I went back and got his food and he put on the gloves and then he left," Mark said.

The entire encounter lasted just a few minutes – and that was that. But in this day and age of SmartPhones – that was not that.

Andrea Stoker happened to be eating lunch in the restaurant that day with her little boy. And she could not help but notice the interaction between the store owner and the disheveled man. She took a photograph and posted a message on her Facebook page – a message that has since gone viral.

Here's what she wrote:

"Bryson and I are sitting in Chick Fil A on 280. A man walked in to get warm with all of his earthly possessions on his back. The manager, who is on his break, got up and asked the man if he could get him anything. Before the man could even answer, the manager asked if the man had any gloves and handed him his, then got him the meal of his choice. There is still so much good in this world and I'm so grateful that Bryson saw it all unfold."

"She was in tears," he said. "She was very appreciative for what I had done – and she said she used it as a teaching moment for her son."

So why is Chick-fil-A so generous?

Well, Mark told me it's the same reason they gave away all those chicken sandwiches during last year's blizzard.

"It all comes from Truett Cathy and the Cathy family and the principles Chick-fil-A has been established on," he said.

And those principles are "to glorify God by being a faithful steward of all that is entrusted to us and to have a positive influence on all who come into contact with Chick-fil-A."

Folks, I've concluded that Chick-fil-A is a chicken sandwich for the soul.

Mark Meadows is the real deal, folks. That's what Audrey Pitt tells me. She's been working for him the past decade.

"He's fantastic to work for," she said. 'You get to watch someone live out an example of who you should be as a person every day. I know it's had a huge impact on me personally."

Chick-fil-A is definitely not your average fast-food restaurant.

"It's a different culture than most places," Audrey said. "Within Chick-fil-A you have the freedom to be that kind of person."

No one quite knows for sure what happened to the young man who walked into the Chick-fil-A on that bitterly cold day. His whereabouts is something of a mystery.

Mark said he'd never seen the man before last week and has not seen him since – leading some to wonder just who it was that came by 4620 Highway 280.

"Do not forget to entertain strangers," the book of Hebrews reminds us. "For by doing so some have unwittingly entertained angels."

And some might have served them a chicken sandwich and waffle fries.

You never know who you are speaking to, serving or passing on the street. Be kind, be patient, be loving. Let others see Jesus in your eyes! 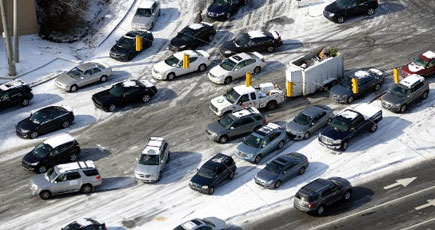 Find out why this Chick-Fil-A closed their doors here!