Compassionate Police Officer Does Something So Kind for a Homeless Man 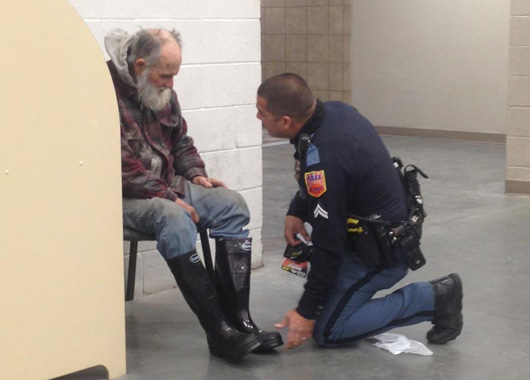 On January 3, 2013, the temperatures in El Paso, Texas dropped below freezing and it began snowing heavily. A winter storm was upon the city and one homeless man desperately needed shelter.

The image above shows the 83 year old homeless man named Charles Holder receiving a brand new pair of heavy-duty leather boots from Officer Jose Flores. They are sitting in the hardware store that Charles took shelter in momentarily.

"They helped me," Holder told KFOX14. "They're a great bunch of people; they're very humane."

When Officer Flores entered the store, he didn't throw the homeless man out for loitering. Instead, he noticed Holder’s wet ragged shoes and socks. So, the police officer went into the store to buy him shoes that would protect him from the elements.

Charles teared up and to show his gratitude, he offered Officer Flores what little food he had on his person.

Acts of kindness like this should never go unnoticed. What people like this police officer are doing is God's work, helping out their fellow man and never letting anyone suffer. Why not help someone out yourself, today? :)