Teen With Terminal Cancer Gives Away Her Make-A-Wish Money

When Make-A-Wish approached 13 year-old Jayci Glover, they never expected her to have this reaction. The Utah girl battling terminal cancer didn't want a vacation or something special for herself. Instead, she asked the foundation to buy a new scoreboard for the high school gymnasium in her hometown of Kanab, Utah. 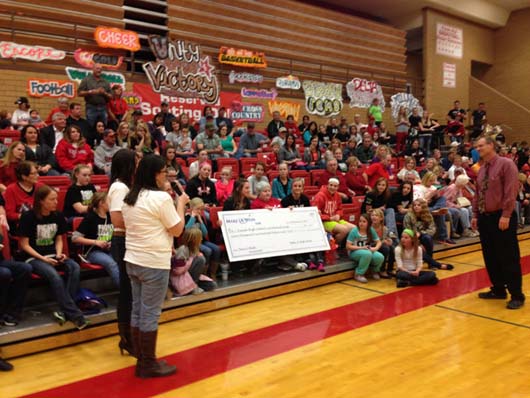 Before a basketball game, the foundation presented the school with a check for $7,500. Principal Brenan Jackson accepted it for Jayci. The boys playing that night were also wearing "Fight Like Jayci" shirts to pay tribute to the brave teenager. Each member of the team gave her a rose and a hug or a kiss before the game.

She is deeply and truly loved by everyone at the high school.

She's been fighting a rare form of terminal lymphoma for nearly a year. The treatments kept her 5 hours away from her hometown, but she and her parents decided to stop treatments. They came home and Jayci just wanted to be comfortable and surrounded by loved ones.

The community has rallied around the dying girl... and everyone showed up to welcome her home when she arrived.

"[We came] around the turn into Kanab. We saw the whole town there," Jayci's father, Coby Glover told KSL.com. The welcome was apparently a complete surprise to Jayci. "I tried to wave and smile but everyone was crying, she said. [There were] a lot of people. It was kind of overwhelming, but really awesome."

Jayci's kindness and final wishes, coupled with this compassionate town, melts our hearts. There is truly good out there in the world, where people spread God's love and message. :)