He was looking forward to this moment for quite sometime, but retired Army Grandpa, Sgt. Maj. David Teufel, was far too sick and in a hospital intensive care unit when his dear granddaughter walked across the stage.

Grandpa Teufel had made detailed plans to travel from Missouri to Maryland to his granddaughter, 2nd Lt. Taylor Batye’s, graduation at the U.S. Naval Academy. He was going to give the new Marine officer her first salute. (Naval Academy tradition is for each newly appointed Officer to present a Silver Dollar to the first person to give the new officer a salute.)

But since he couldn’t make it the entire family who has a strong military legacy was disappointed.

So Taylor pack her bags after graduation and she drove 16 hours to Missouri to share the special moment that she saved just for her grandpa…surprising him!

Before the surprise, two of Grandpa Teufel’s old time Army buddies paid him a visit and gave him a nice shave and haircut. They were in on the surprise, and they knew that their buddy wasn’t “one for looking shabby” not even in a hospital bed, and that he’d want to look sharp for the honor that was coming her way.

Finally when Taylor arrived, three nurses tearfully peaked in at the surprise. 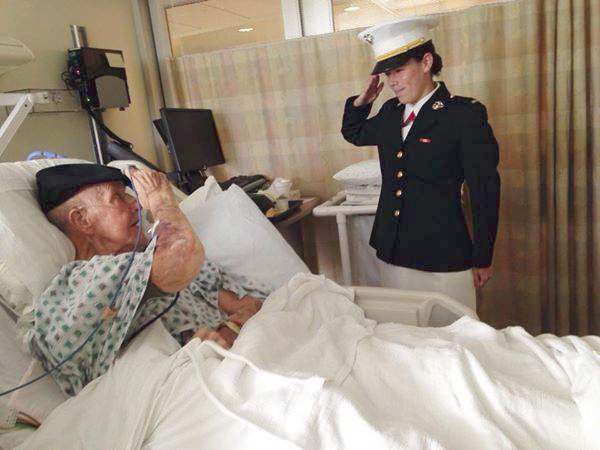 Taylor’s mom, Marty Teufel, snapped a meaningful photo as the newly minted Marine officer got her first salute that she had held out for.

Grandpa Teufel loved the photo so much that he requested that it be blown up and framed to keep right next to his bed. His daughter Marty said “There’s just so much emotion in it,” she said. “You see the pride, the service — it’s just a very emotional thing.”

Grandpa Teufel smiles every time he sees his picture. He is so proud of her, especially since she is the first one in the family to serve as an officer

“He taught us all honor, duty and commitment,” Marty said about her dad’s Army career. “Then we taught [our kids] that this is our country, and only we can protect it.”