The bond between police officers is a deep one. They often become like family. But not all police officers walk on two legs. There are also 4-legged heroes included in the fold. And recently, the Houston Police suffered the loss of one of their 4-legged members -- a police horse named Charlotte. 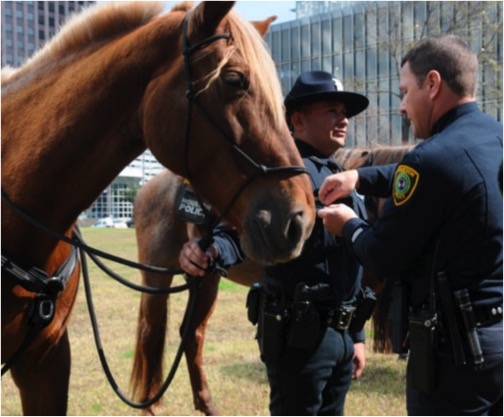 So when she headed out on the streets of Downtown Houston with her partner, Officer D. Herrejon, no one expected it to be her last day of service. 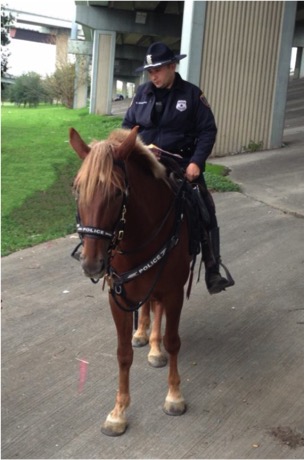 But sadly, this day was tragically different than the others. According to WTSP News, the normally calm patrol horse was spooked by a cement truck. The scare caused her to buck unexpectedly, tossing Officer Herrejon off. The Animal Justice League reports that Charlotte then backed into the wheel of the concrete truck, which broke her leg. An investigation has shown that the driver of the truck was in no way responsible for the unfortunate accident.

The heartbroken Officer Herrejon was pulled from the scene so he could be transported to the hospital in an ambulance. And so, the Animal Justice League reports that his fellow brother in blue, Ronald Curry, stayed with their fallen partner. The heartbreaking photo has since gone viral. 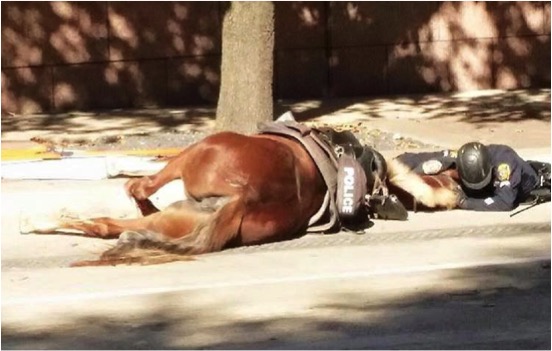 Officer Curry got down on the street and lay with Charlotte, who’s back legs were severely damaged. A veterinarian arrived at the scene, but to everyone’s dismay, there was nothing that could be done to save the horse -- she would have to be euthanized.

And so, with a heavy heart, Officer Curry covered Charlotte’s face and held her as she took her final breaths. And the incredibly emotional photo has touched hearts all over.

“We admire the heart and strength of this officer,” says The Animal Justice League in their Facebook post.

And we couldn’t agree more. Love is not something that only exists between humans. Charlotte was just as much a member of the Houston Police family as any human officer, and the loss is being mourned by the whole department.

The photo is especially moving to anyone who has loved and lost an animal. Our prayers and condolences go out to the Houston Police Department. Charlotte’s partner, Officer Herrejon, was checked out at the hospital and is just fine -- physically. But we know he is dealing with the pain of losing his partner, and we pray that God will bring him peace.

Since going viral, the Houston Police Department has been flooded with messages of support. You can watch a special thank you from Officer Ronald Curry below:

When you see what these officers did for this fallen hero you'll be stunned!