Ray Johnstone never meant to become an Internet sensation. He was just a lonely widower looking for a new fishing partner after his passed away. But then his online ad went viral, and he got way more than he ever expected!

Seeking A Friend To Go Fishing

As a retired widower living in Australia, Ray had a lot of time on his hands. So, he filled it with fishing. But then his fishing partner passed away, and Ray again found himself with too much time alone.

So, he turned to the Internet for help.

You have to admire the man's gumption. Though not well-versed in the world wide web, Ray crafted a classified ad seeking a new partner.

"My name is Ray Johnstone, Australian," Ray wrote in his ad. "I'm a widowed pensioner who is looking for a fishing mate. My previous fishing mate is now deceased. . . What I want is a fishing mate in a similar position to myself who also wants someone to go fishing with. I am willing to share all costs."

The ad itself was simple. It listed the type of fishing Ray enjoyed, pictures of the spots he frequented, and, of course, his contact information. But it was the tender vulnerability of a lonely man seeking a friend that really struck a chord. And no one could have guessed what would happen next!

RELATED: The internet went into an uproar after a 93-year-old veteran's beloved dog was stolen from his backyard

The adorable yet heart-wrenching ad posted by the lonely widower looking for a new fishing partner captured the hearts of all who read it. And before long, Ray's post had gone viral!

Everyone, it seemed, wanted to be Ray's new fishing partner. The offers poured in like crazy. But it was a humble and sweet young man who won out.

22-year-old Mati Batsinilas saw a news article on Facebook about Ray's plea. Mati's family owns a local fishing business, and he was more than happy to fish with the elderly man.

“I commented on Facebook news article just saying ‘Hey mate, you’ve probably found your fishing buddy and you probably don’t need me. But if you see this message I’m more than happy to take you on a trip to Queensland’,” Mati says.

To his surprise, his sweet comment had gone viral itself!

“I went to sleep that night thinking nothing of it," Mati recalled. "Then I woke up the next morning and my comment had 1,000 likes and I had 200 messages from people saying ‘Take him on a fishing trip’. . .so I did.”

RELATED: A little girl befriends a lonely widower at the grocery store

A Fishing Trip To Remember

A local newspaper put Mati and Ray in contact. Mati, who lives in Brisbane, roughly 900 miles away from Ray, generously paid for Ray and his grandson to fly up and stay.

"I haven’t looked at the fees to be honest. I just paid for everything. It doesn’t bother me," Mati replied when asked how much the trip cost.

Mati and his younger brother then took Ray and his grandson out on the family boat, where they spent hours fishing.

Afterwards, they met up with the rest of Mati's family for a late breakfast. The joy in Ray's eyes made it a wonderful experience for everyone.

“The idea of this trip, it wasn’t just about fishing. It was about getting him up here to bring a smile on his face,” Mati explained.

Seeing a young man show so much kindness to a lonely widower is truly amazing. Mati certainly knows how to respect his elders, even if they are complete strangers!

“I did it out of good will," he said. "Honestly, it touched me. I come from a family of four boys and we love fishing. We do it all the time. If something was to happen to us and our old man was left on his own, that’s just awful. There’s no way I would want that to happen to my old mate or my grandfather.”

It's awesome to see how God can take something as simple as an online ad and use it to touch these lives in such a profound way. Please be sure to share this heartwarming story with anyone you know who needs a smile!

"Likewise, you younger, submit yourselves to the elder. Yes, all of you be subject one to another, and be clothed with humility: for God resists the proud, and gives grace to the humble." 1 Peter 5:5

A dying 89-year-old is spending her final days living with her younger neighbor! 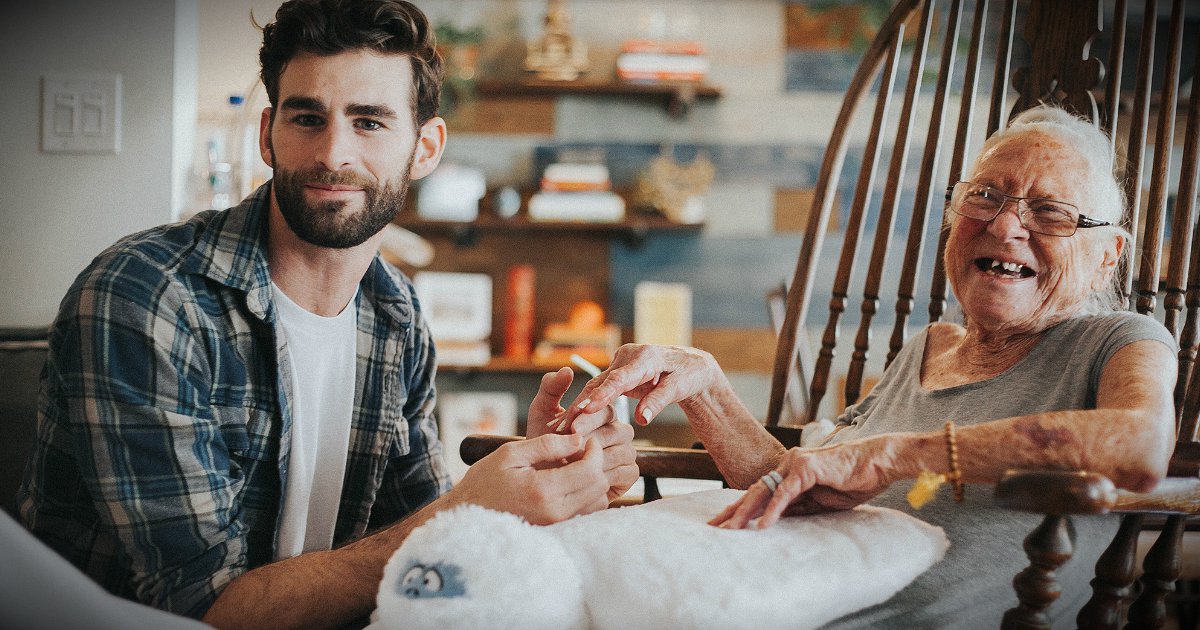