This Craigslist Ad About a Lost Dog Isn't What You Think... We Love This!

An abused dog showed up on a stranger's porch, injured and terrified. After taking the dog in, the good samaritan posted this ad on Craigslist (click here to view the ad)...

But you wouldn't believe its contents.

"Your pit bull found me," the post reads. "And I'm not giving her back." 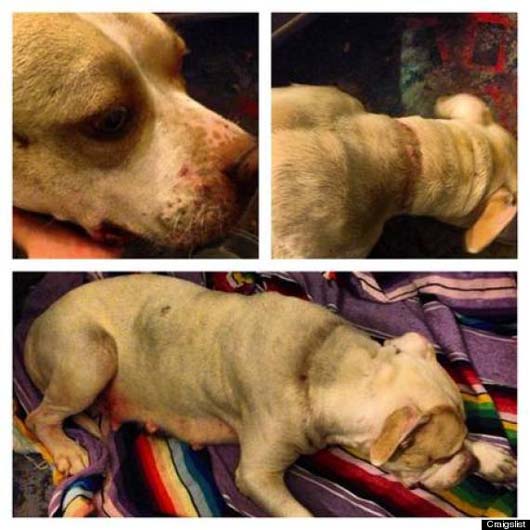 "Last Friday night, your dog wondered up onto our porch. Signs of the abuse she had somehow escaped, riddled her body. The fresh bite marks on her muzzle, the scars that covered her body, the exposed pink and purple flesh around her neck, where she was obviously tied up with ropes that cut their way into her skin, over and over again. The obvious signs that she had been bred, relentlessly, time after time. The pressure wounds on her elbows that bled whenever they touched anything, from being tied and forced to lay on cement ground and metal cage mesh.

None of those things are even the worst part. Upon examining her teeth to gauge her approximate age, I burst into tears. I found that you had pulled the majority of them out and the ones you left, had been filed down. And you did this without anaesthesia, this I am sure of. You did this so she couldn't fight back. You did this so she couldn't injure any dogs you had trained to fight, when you threw her in there with them. With each bite of her they took and each yelp she cried, they'd look at you for reassurance. Because all they wanted to do was please you. Loyalty is in their blood. Violence is not.

The first night she was here, I stayed up with her and only slept for 2 hours. Every time I'd move, she'd get up and look at me with worry stricken eyes. She didn't want me to leave her.

Somehow, God must have led this mama to my doorstep, knowing she'd find comfort here. The next morning, I took her to my work on my day off. I work at an animal hospital.

Upon entering the building, her neck started to bleed. The thick collar which you put on her, had cut into the tender scars on her neck. She didn't even yelp. I discovered it as I was weighing her and saw blood on the scale. I took the ridiculous thing off of her.

The amazing people I work with have all fallen head over heels in love with your dog. So when we discovered she has breast cancer, it broke our hearts even more.

Over the last 3 days, our staff has grown to love this beautiful and broken soul. Skin and bones, we feed her constantly but only foods that are soft enough for her... You know, since you ripped her teeth out and all.

Mama lets you get right up in her face. In fact, she LOVES it. She'll give you slobbery kisses and nuzzle your face with love.

We're all amazed at how trusting of humans she is. Dogs however, completely terrify her. It doesn't matter the size, she growls in fear and tucks her tail between her legs. But who can blame her? After what you did to her?

Tomorrow, Mama will finally feel peace. And when she closes her eyes and takes her last breath, I'll be there. I'll hold her big ol head and I'll tell her how much I love her.

And when her soul has left her battered body and I've dried the tears enough to see, I will document every bruise, every bite, every cut, scrape and gash. I'll photograph her teeth, or rather, where her teeth used to be. I'll turn in all the evidence and post it where EVERYONE will see it. I'll use it to educate kids in heavily crime ridden areas, on the horrors of dog fighting." 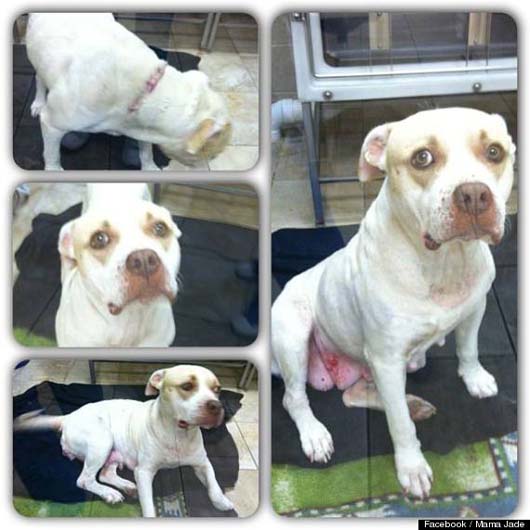 "If you could do that to a dog, you should not be allowed in everyday society. And teaching our children right from wrong is the only way to put a stop to this.

One day, you will be caught. If I ever find out who did this to the dog we all lovingly know as "Mama Jade" I honestly don't know what I would I do. But it would probably involve contacting your mother and informing her of what a monster she managed to raise. My goal would be to make a mockery out of your pathetic life.

Mama Jade's story will not be silenced. She just happened to show up on the doorstep of one extremely persistent, intelligent, respected and now angry human being." 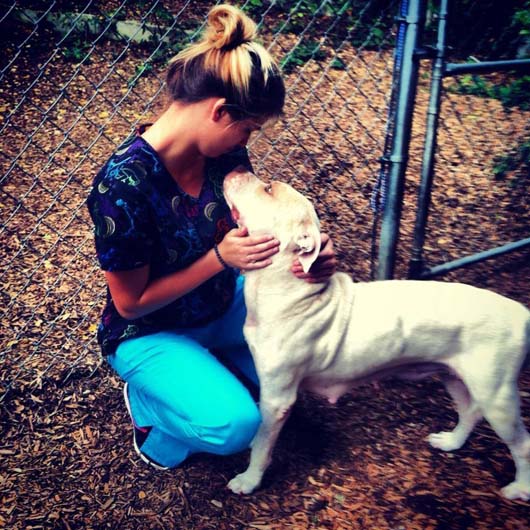 Now Mama Jade has a loving home and doesn't have to face the violence she was put through, day after day. Thousands of people have reached out to her rescuer, even offering to donate money for veterinary bills. Unfortunately, Jade's cancer is so severe she won't be able to survive. But until she passes... she knows what love is.

"Many people and charities have asked if they could donate funds for Mama to get the treatment for her cancer," says Mama Jade's rescuer.

Treat every creature of God with respect. They were beautifully made and put on this earth for us... but not to be tortured.