Divine Intervention Saves Baby From Disease With 90% Chance Of Death

Nick and Brooklyn Schnarr were heartbroken when doctors basically told them their unborn baby boy, Charlie, stood almost no chance of survival. He suffered from a severe condition that put "water on the brain," and there was a 90% chance he wouldn't survive. But the family kept on praying. And God's work was so evident when miracle baby Charlie survived, even the doctors called it divine intervention!

Off The Charts Bad

Nick and Brooklyn were already blessed with two lovely daughters when they learned Brooklyn was pregnant with a boy, Charlie. But what doctors called an "off the charts bad" diagnosis quickly ruined the excitement.

Around five months into the pregnancy, doctors diagnosed Charlie with severe hydrocephalus. Often called "water on the brain," it's a condition where excess fluid builds up in the baby's skull, with no way to drain. It puts excessive pressure on the baby's brain, and all of the experts told Nick and his wife the condition was almost certainly fatal.

"It was so extreme, that the specialists stopped measuring and monitoring his brain's fluid level because, at that point, it didn't really matter," Nick explained on Facebook. "The MRI's were sickening to look at. We were told, pointblank, that there was over a 90% chance that the baby would either die shortly after birth or have such severe cognitive impairments that any quality of life would be hard to imagine."

Despite the bleak outlook, the family continued to pray and trust in the Lord. Meanwhile, Brooklyn temporarily moved into a hotel room so that she could be close to the hospital in case she went into labor.

On the day that she did, doctors prepared her for a c-section and went over some of the life-saving options for when her very sick little boy was born such as a breathing tube. They warned Brooklyn that she and Nick would eventually need to make a tough decision regarding removing the tube so that Charlie could go to Heaven. But just 15 minutes later, God proved His plans were all that mattered!

"Guess what?. .the baby came out crying - which was the sweetest sound I have ever heard," Nick said.

Miracle baby Charlie was born perfectly healthy except for a mild ventricular enlargement, which can be treated by check-ups.

All of the doctors and nurses were shocked. It appears as though Charlie's brain found a way to naturally "clear" the backed-up fluid.

"The doctors said, 'we do not have and cannot come up with a medical explanation for what we've witnessed here'. Some how, his brain found a way to naturally 'clear' the blockage or re-route the fluid that was causing the oppressive 'back-up' of brain fluid," Nick wrote. "During the last week, I heard the word 'divine intervention' and 'miracle' more times than I could count. Nurses with decades of experience, and esteemed, nationally admired doctors were flabbergasted but jubilant."

RELATED: Their baby girl was supposed to die, so the family prayed for a miracle

But it's no mystery to Nick as to what's behind Charlie's miraculous healing -- prayer. For the past several months, friends, family and even strangers have prayed for this precious boy. And it worked!

"I'm a practical person that certainly believes in science and medical technology, but I absolutely know, from the bottom of my heart, that God was involved in this. I give ALL of the credit and glory to him," Nick said. "From the bottom of my heart, thank you, thank you, thank you for all of your thoughts, prayers, notes of encouragement, cards, texts, emails, and outpouring of love. Prayer is positively powerful. God is real, and he still performs miracles."

God clearly has a big purpose for little Charlie. We serve an awesome God, and nothing is too big for Him!

"Many are the plans in the mind of a man, but it is the purpose of the Lord that will stand." Proverbs 19:21

This miracle baby is alive today after doctors put her in a sandwich bag! 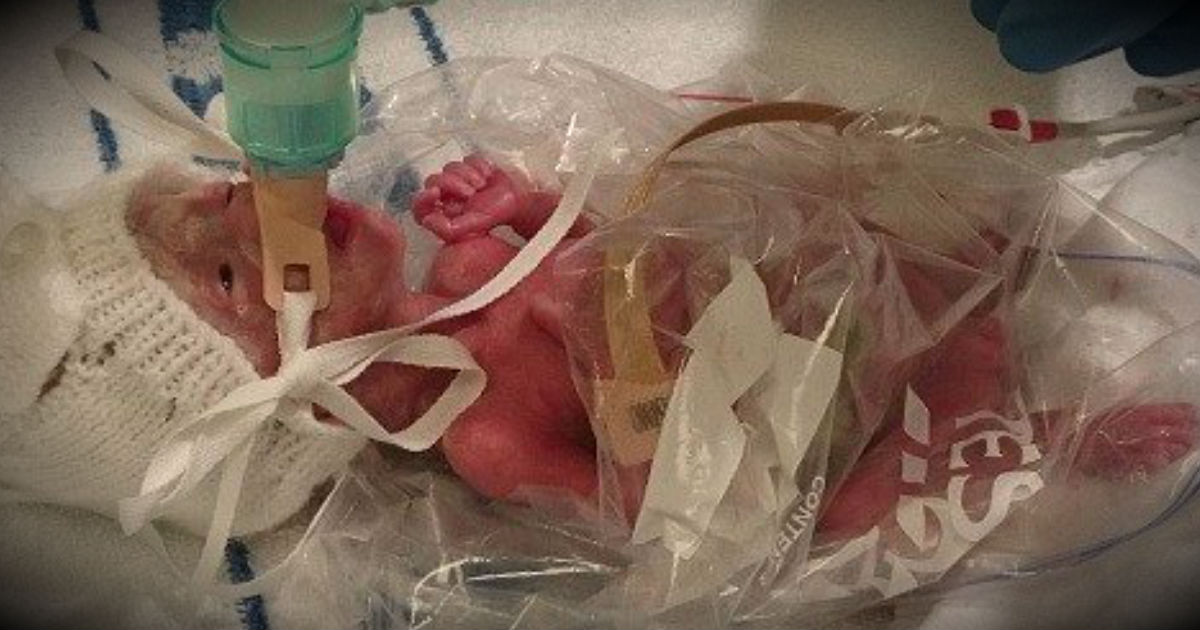