One Man Took It Upon Himself To Write His Own Obituary...Now I Don't Know Whether To Laugh or Cry.

Walter George Bruhl Jr. was a vey witty man; he was so witty that he wrote his own obituary. You’ll enjoy every word of it, and by the end you will have wished that you would have known such a fine gentleman. Remember that while many of us won’t write our own obituaries, we are writing what others will say about us everyday. But for now please enjoy reading the obituary of a man who planned ahead: 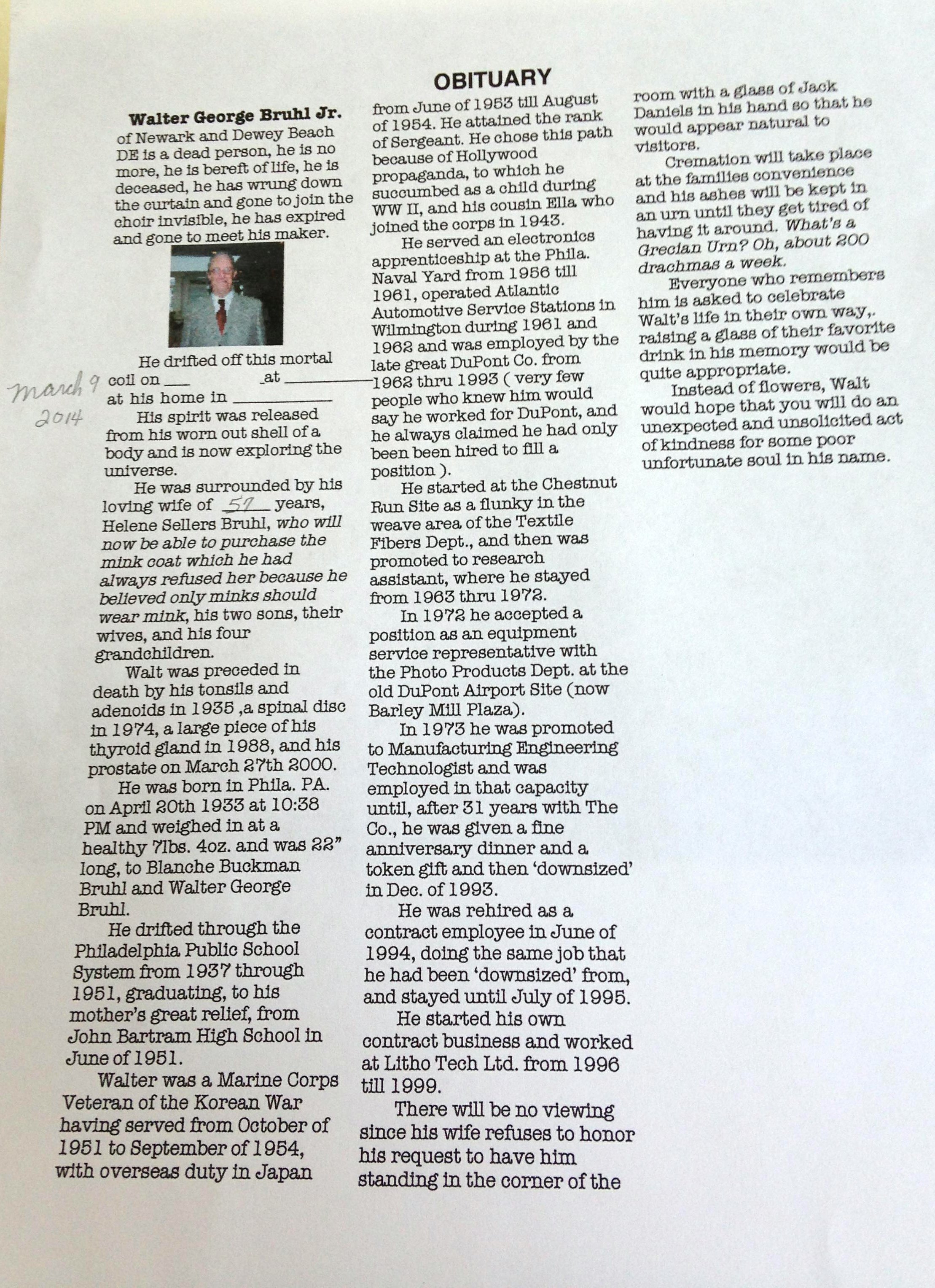 Walter George Bruhl Jr. of Newark and Dewey Beach is a dead person; he is no more; he is bereft of life; he is deceased; he has rung down the curtain and gone to join the choir invisible; he has expired and gone to meet his maker.

He drifted off this mortal coil Sunday, March 9, 2014, in Punta Gorda, Fla. His spirit was released from his worn-out shell of a body and is now exploring the universe.

He was surrounded by his loving wife of 57 years, Helene Sellers Bruhl, who will now be able to purchase the mink coat which he had always refused her because he believed only minks should wear mink. He is also survived by his son Walter III and wife Melissa; daughters Carly and Paige, and son Martin and wife Debra; son Sam and daughter Kalla. Walt loved and enjoyed his grandkids.

He was born in Philadelphia, Pa., April 20,1933 at 10:38 p.m., and weighed in at a healthy seven pounds, four ounces, and was 22 inches long, to Blanche Buckman Bruhl and Walter George Bruhl.

He drifted through the Philadelphia Public School System from 1937 through 1951, graduating, to his mother’s great relief, from John Bartram High School in June 1951.

Walter was a Marine Corps veteran of the Korean War, having served from October 1951 to September 1954, with overseas duty in Japan from June 1953 till August 1954. He attained the rank of sergeant. He chose this path because of Hollywood propaganda, to which he succumbed as a child during World War II, and his cousin Ella, who joined the corps in 1943.

He served as electronics apprenticeship at the Philadelphia Naval Yard from 1956-61; operated Atlantic Automotive Service Stations in Wilmington during 1961-62; and was employed by the late great DuPont Co. from 1962-93. (Very few people who knew him would say he worked for DuPont, and he always claimed he had only been been hired to fill a position.)

He started at the Chestnut Run Site as a flunky in the weave area of the Textile Fibers Department, and then was promoted to research assistant, where he stayed from 1963-72. In 1972 he accepted a position as an equipment service representative with the Photo Products Department at the old DuPont Airport site (now Barley Mill Plaza).

In 1973 he was promoted to manufacturing engineering technologist and was employed in that capacity until, after 31 years with The Co., he was given a fine anniversary dinner and a token gift and then "downsized" in December 1993. He was rehired as a contract employee in June 1994, doing the same job that he had been "downsized" from, and stayed until July 1995.

He started his own contract business and worked at Litho Tech Ltd. from 1996-99.

There will be no viewing since his wife refuses to honor his request to have him standing in the corner of the room… so he would appear natural to visitors. 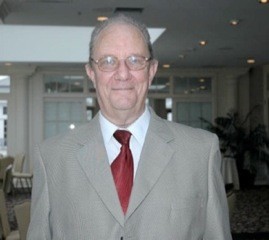 Cremation will take place at the family's convenience, and his ashes will be kept in an urn until they get tired of having it around. What’s a Grecian Urn? Oh, about 200 drachmas a week.

Everyone who remembers him is asked to celebrate Walt’s life in their own way; raising a glass of their favorite drink in his memory would be quite appropriate.

Instead of flowers, Walt would hope that you will do an unexpected and unsolicited act of kindness for some poor unfortunate soul in his name.

A memorial luncheon in Walt’s honor will be held Saturday, March 15, at 1 p.m., at Deerfield, Newark, Delaware.