Nowadays, it’s hard to find someone giving credit where credit is due on national television. But if you watched the Oscars on Sunday evening you would have witnessed actor Matthew McConaughey doing just that. 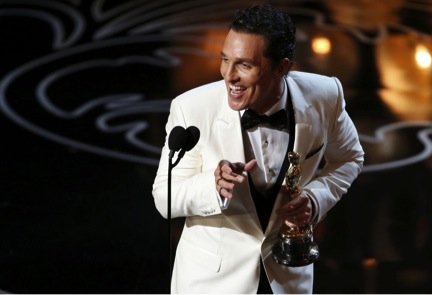 When his name was announced as the winner for Best Actor, he kissed his wife, walked to the podium, and started his speech that included these unexpected words:

"There’s a few things, about three things to my account, that I need each day.

Now, first off, I want to thank God. ‘Cause that’s who I look up to. He has graced my life with opportunities that I know are not of my hand or any other human hand.

He has shown me that it’s a scientific fact that gratitude reciprocates.

In the words of the late Charlie Laughton, who said, 'When you’ve got God, you got a friend. And that friend is you.'"

The actor then lovingly reminisced at the memory of his father when he said, “To my family, that is who and what I look forward to. To my father who, I know he’s up there right now with a big pot of gumbo . . . He’s got a lemon meringue pie over there. . . .to you, Dad, you taught me what it means to be a man.”

McConaughey doesn’t stop there, but he pays tribute to the rest of his family when he said, "To my mother who’s here tonight, who taught me and my two older brothers… demanded that we respect ourselves.  And what we in turn learned was that we were then better able to respect others. Thank you for that, Mama. To my wife, Camila, and my kids . . . the courage and significance you give me every day I go out the door is unparalleled. You are the four people in my life that I want to make the most proud of me. Thank you."

When receiving recognition for his good performance, Matthew McCouahgney was quick to acknowledge that everything he had was not because of the good Lord.  His mind was on what mattered most to him, God and family.

We should always remember to thank God for the the talents that He bestows upon us, and give honor to Him whenever we can!