The Faith that This Sick Girl Has Will Inspire You for Days. A Must-Read Story.

We want to thank the GodVine users who were generous enough to share this incredibly moving story below. Amber is a girl that is battling cancer, and through it all she has a faith and outlook that will leave you inspired for days. Please, read her story:

Amber Martin had a rather ordinary Monday afternoon. 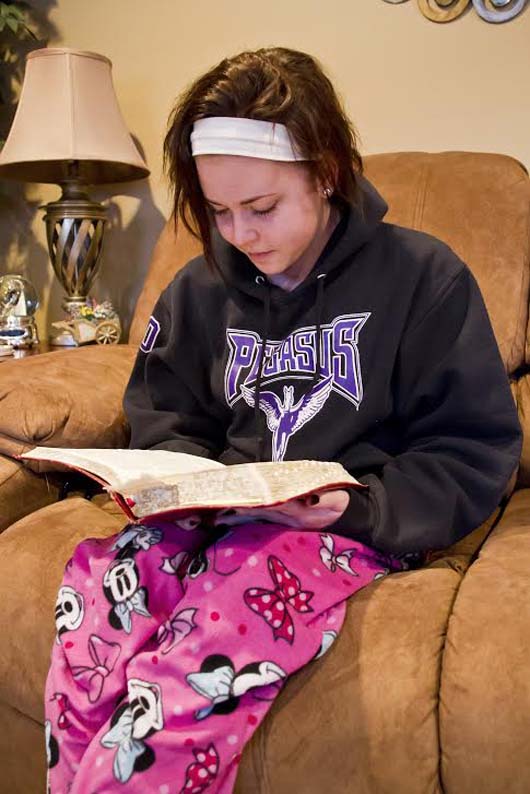 She did what a lot of typical teenagers do. She spent quality time with friends, family and pizza. In the midst of one of the coldest winters in Central Pennsylvania, Amber bundled up in a cozy sweatshirt and a pair of PJ bottoms -- her bubbly, confident and infectious personality on display for all to see.

Though, underneath it all, she carries the weight of being diagnosed with terminal astrocytoma – a form of cancer – from a tumor in her spinal cord.

But Amber isn’t a typical teenager.

Doctors recently told the 16-year-old that she has only months to live.

And that’s okay with Amber.

Because this is all part of God’s plan.

“I’m okay with dying,” she said. “As long as it’s bringing other people to Jesus Christ; even if it’s one.”

“The first night they told me (the tumor) was terminal I prayed to God the whole night that I would have peace about dying – and I did.”

“I hope that through either my healing or my death, whichever God’s will be, that I can bring others to Christ, whether it be hundreds or one single person.”

That first night was January 9th, of this year. That’s when Amber, who was diagnosed with lyposarcoma in April 2008 and put it into remission, found out from doctors that her astrocytoma tumor was terminal and wasn’t going to be removed.

“That’s the night I prayed,” she said.

And when she woke up, the only thing she didn’t have peace about was that her friends and family would be in accord if she passed away. The next day, she called loved ones and told them about the tumor.

“I kind of knew I had a tumor,” she said. “I could feel it in my fingers, but I didn’t know it was terminal.”

“Once I found out, I just thought of my dad. That was the one thing that made it a lot easier. Just knowing I’d get to see my dad.”

Amber said she spent a lot time away from her dad when he was ill and that she knew what was going on but regrets a lot of that. But she’s following in the tracks of his love for the Lord and his evangelism of the gospel.

“I saw how he spent his time with all these people talking about God, so that’s what I’m trying to do right now.”

Amber makes it by with the help of medication and a stream of chemotherapy. If it wasn’t for the steroid medication, Amber’s tumor would be swollen and her feet wouldn’t work. Without medication, the tumor would press into her spinal cord and she wouldn’t be able to swallow. The medication keeps her out of her bed, with full mobility. 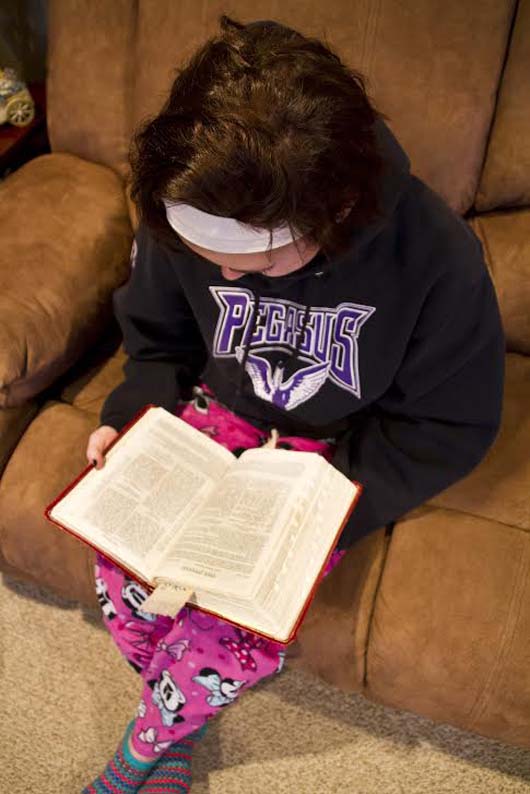 Next Monday, Amber will undergo three different chemotherapy’s sessions to try and buy her more time to live.

“I think the tumor is shrinking,” she said with a smile. “I’m feeling better each day.”

“Or maybe it’s just the prayers. They’re working too; I can feel it when I get up.”

“They say you’re supposed to feel the chemo, but I don’t feel it.”

Amber doesn’t get much sleep these days; most of the time she’s awake at 2 a.m., on her iPad bible app. The next three hours of time is simply known as ‘iPad bible time’ to Amber.

“I sleep for like two hours. My brain doesn’t want to sleep – even if my body is tired.”

She reads most of the online bible healing plans that are available to her; she’s got them specially bookmarked.

Her recent go-to scriptures have been uplifting.

You heard me say, ‘I am going away and I am coming back to you.’ If you loved me, you would be glad that I am going to the Father, for the Father is greater than I. -- John 14:28

‘Call to me and I will answer you and tell you great and unsearchable things you do not know.’ -- Jeremiah 33:3

'They must turn from evil and do good; they must seek peace and pursue it. For the eyes of the Lord are on the righteous and his ears are attentive to their prayer, but the face of the Lord is against those who do evil.' -- I Peter 3:11-12

On the side, Amber, who was baptized at 12 years old and a Christian her entire life, will try to complete her GED.

Also, on the side; simply getting that ‘one’ to come to Christ.

Amber says she has already noticed the fruit by people asking “God” questions, but there will still be family and friends who will have questions.

“I want people to pray for my friends who don’t know God. If I go here soon, I pray that it would not put them down a bad path, but a good path (to Christ),” she said.

And for the people who doubt Him because this is happening to Amber?

And the healing power of Jesus?

“Healing me is not what it’s about. He knows what’s going to happen. Satan can put cancer in me, but we need to get the others to Christ that’s what it’s really all about,” she said.

“That’s what the whole cancer thing is about with me. It’s not about me dying; it’s about bringing everybody else to Christ. I see it. It’s one big plan. It’s all a big plan,” she said.

“For to me, to live is Christ and to die is gain.”

God’s love is what keeps Amber steadfast in her faith.

Through the loss of her father, losing possessions in a house fire earlier in her life, Amber never doubted His love for her and her family. And her remaining goal is for others to experience that powerful, life-changing love.

“Jesus died for us and I can love anyone, anybody, no matter what they’re doing. If they can feel that from me, imagine what God could do.”

“If He’s given me the ability to love people that much, how much can He love them?”

“He didn’t even know them and he died for them. It’s all about love.”

Amber says that people need to know that she will get to see her Dad either way, so she is happy about that.

A scan will be done at that point to see if any changes in the tumor were made. At that time, a decision will be made to continue treatment or stop it. She recently was in Oklahoma saying goodbye to loved ones and friends.

“Just gaining one person to God (through salvation) is a win.”

“If I was healed I’d get to show like billions of people that God is real and I’d get to live on, but that’s a little selfish. One person is a gain, more people would be amazing.”

For we know that in all things God works for the good of those who love Him, who have been called according to His purpose.