The Spot On Her Baby's Lip Grew Into A Debilitating, Kiwi-Sized Birthmark

At just two weeks old, Brianna Brewer's mom noticed a faint mark on their baby's mouth. Doctors said not to worry -- the spot would go away. But it didn't. Instead, it kept getting bigger. Before long, it was so enlarged it was interfering with Brianna's speech, ability to eat and the growth of her teeth. But then the Vascular Birthmarks Foundation stepped in, blessing the 3-year-old girl with a life-changing surgery to remove the kiwi-sized birthmark!

More Than Just A Mark

The mark that doctors originally thought was nothing turned out to be a hemangioma. It's a type of vascular birthmark comprised of blood vessels that gather underneath the skin to form a reddish-purple lump.

While doctors initially said the spot would go away, it did just the opposite. The mark continued to grow, becoming larger than the little girl's nose!

Complications From The Birthmark

Doctors in Ohio, where the family lived, called the birthmark a tumor and insisted surgery wasn't an option until it started to shrink. But the spot just kept growing. And eventually, the kiwi-sized birthmark started causing all kinds of problems for little Brianna.

Brianna's hemangioma was so large, it started causing developmental delays. Poor Brianna's swollen lip kept her top teeth from coming in. As a result, she developed an under-bite. She had difficulty smiling. Her lips couldn't close, impairing her speech. Getting a spoon into Brianna's mouth was a battle.

"At its largest the hemangioma was the size of a kiwi and was so big that Brianna was struggling to eat and we had to feed her from an angle," her mom recalls.

But those were just the physical challenges. The swollen, purple birthmark came with emotional challenges, as well.

RELATED: Woman with a facial birthmark uses a no make-up selfie to silence bullies

Strangers stared at Brianna when she was out in public. Some folks even remarked on how beautiful she'd be "if it wasn’t for her lip.”

But the final straw came when Brianna's mom, Hollianna, attempted to enroll her daughter in a head start program.

The idea was to get Brianna socially ready for Kindergarten. But during a tour of the school, another child reacted so cruelly to Brianna’s appearance, it left Hollianna in tears. Combined with the developmental delays, Hollianna knew something had to be done.

“I was worried about her well-being,” she said. “People are cruel. We got beyond the normal types of stares."

But doctors in Ohio continued to say it was too soon for surgery.

"They kept saying it was too invasive," Hollianna explained. "They were afraid she would bleed to death."

RELATED: Baby boy with his brain growing outside of his skull gets a miracle surgery

Desperate, Hollianna turned to Facebook to vent. And that's when the Vascular Birthmarks Foundation (VBF) came to the rescue!

“When Brianna’s mother shared her daughter’s story, I knew VBF had to intervene,” said Dr. Linda Rozell-Shannon (PhD), President and Founder of VBF.

The organization reached out to Hollianna, connecting her with Dr. Chad Perlyn at Nicklaus Children’s Hospital in Miami, Florida. There, 3-year-old Brianna received a life-changing surgery to remove the kiwi-sized birthmark and reconstruct her lip.

After the swelling goes down, her lip will look perfect!

“Her outlook looks great,” Dr. Perlyn said. “She’s gonna have a bright happy future, and we’re thrilled to be a part of it.”

Brianna is the 100,000th child the VBF has helped. A joint effort between the VBF and the Frank Catalanotto Foundation (FCF) covered all of the expenses for Brianna's surgery. Frank Catalanotto is a former Major League Baseball player, and the VBF assisted him and his wife, Barbara, when their own daughter, Morgan, was diagnosed with a hemangioma in 1999.

“We are happy to be able to help Brianna and her family,” said Barbara Catalanotto. “It is truly a blessing to be able to give back to VBF and continue our work with this wonderful foundation."

Needless to say, Brianna's family is incredibly grateful for this blessing. The precious girl is now able to unleash her bright smile without anything holding her back.

“I’m looking forward to seeing what she can do, what she can do for the world,” Hollianna said of her 3-year-old daughter. “This experience has changed us all, so I can’t imagine what she’s gonna do with her life to change someone else’s.”

This brave lady took on bullies and used her birthmark to inspire thousands! 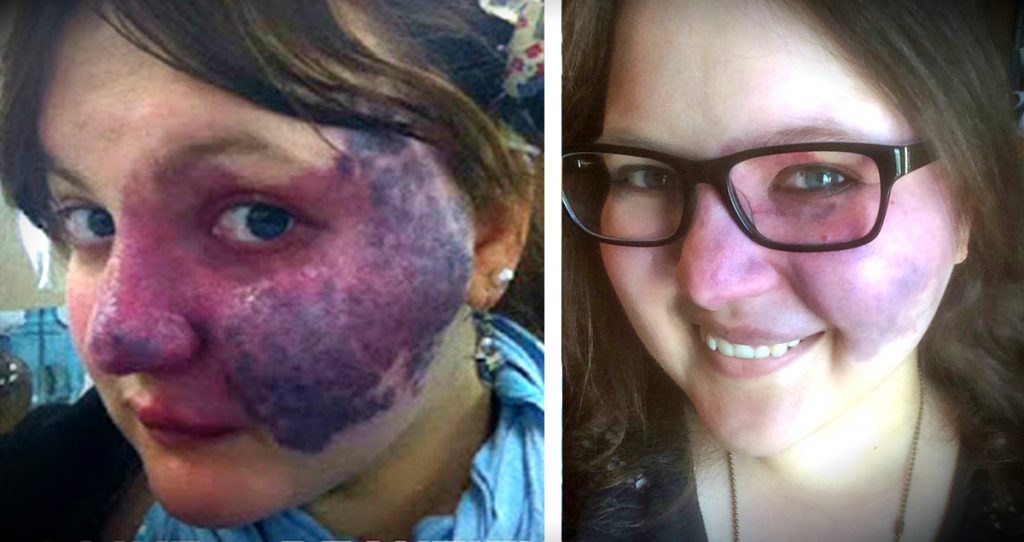