To Stop People From Harassing Him For Using Handicap Services, He Did THIS!

Looks Can Be Deceiving

We’ve all seen it happen. Someone pulls into the handicap spot in a parking lot, and folks automatically start checking for proof they deserve the space. And if a handicap is not obvious at first glance, then there’s grumbling and nasty looks. How dare they, right? Not exactly. Remember -- you can’t always judge a book by its cover. 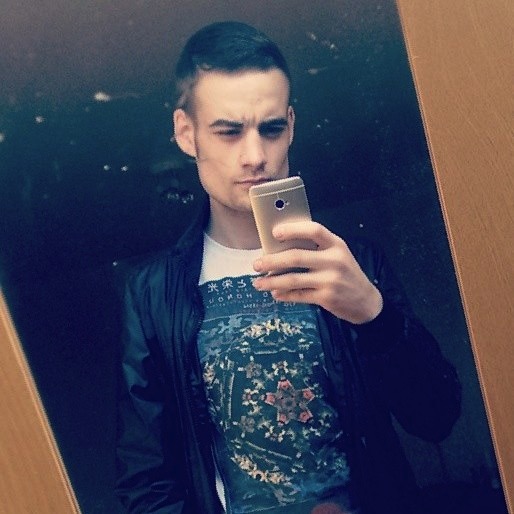 This type of disapproving reaction is exactly what happens to 24-year-old Ste Walker on a regular basis. Most see him as just a young, attractive guy -- no way he’s disabled. But you see, Ste has Crohn’s disease and a host of ailments as a result.

Most of the signs that would give away his illness are internal or hidden beneath his clothing, allowing him to look “normal.” And considering the staring, whispering and finger pointing many with disabilities have to endure, this could be seen as a small advantage to this particular illness. 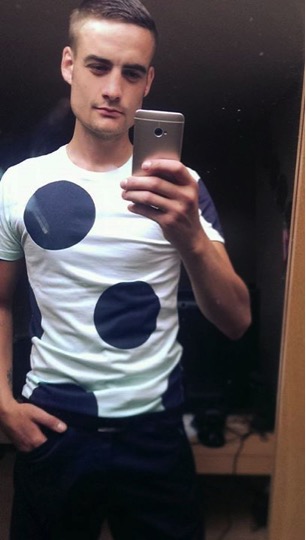 But even though Ste is able to disguise most of the disease’s horrible side effects, it doesn’t make it any less painful. Yet, when he utilizes things like handicapped parking, his walking cane, handicapped toilets -- he gets flack from those around him.

The frequent accusations that he’s scamming the system finally pushed Ste to post the following “rant” on Facebook, posting side by side photos to show exactly what’s hidden beneath his clothing. To his surprise, it went viral!

Read on as Ste reveals just what others are missing when they look at him: 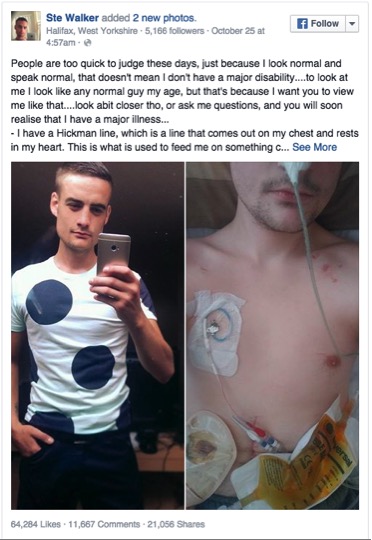 “People are too quick to judge these days, just because I look normal and speak normal, that doesn’t mean I don’t have a major disability….to look at me I look like any normal guy my age, but that’s because I want you to view me like that….look abit closer tho, or ask me questions, and you will soon realise that I have a major illness…

– I have a Hickman line, which is a line that comes out on my chest and rests in my heart. This is what is used to feed me on something called TPN as my stomach doesn’t work correctly.

-I have a ryhlls tube down my nose and into my stomach to help drain it, because my stomach doesn’t empty like a normal persons does.

-I have a scar that runs from the centre of my chest to the top of my pubic bone which is where I’ve been opened up 3 times in the last 2 years for major life saving surgeries. 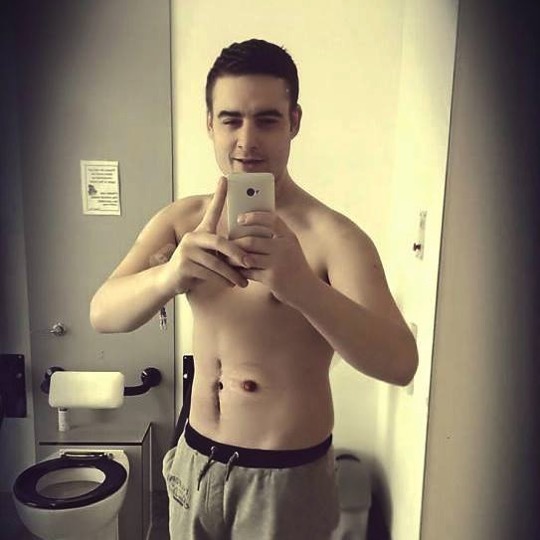 -I have an ileostomy, or stoma as they are more commonly known, this is a section of small bowel that comes out of my abdomen which I then attach a stoma bag on to, to collect poo because inside my bowels it’s full of chrohns disease, ulcers, strictures, fistulas, narrow sections, tumours etc.

-a normal person would have about 20foot of small bowel and 5foot of large bowel, due to all my surgeries I have 3foot of large bowel left and only 8foot of small bowel left. This cause major problems, short bowel syndrome (SBS) is one of them. This causes me to have a high output in my stoma which in turn dehydrates me, it also means I don’t absorb nutrients from food (which is why I’m on TPN) and I don’t absorb oral medications, liquids or tablets as all these are absorbed in the small bowel.

-I have a section of bowel attached to my stomach because my duodenum is full of strictures and active disease so my stomach doesn’t empty threw it. The loop of bowel I had joined to it (gastrojejunostomy) was meant to solve this problem but because my stomach hasn’t worked in so long it won’t start working again so that’s why I use TPN.

-all my medication are IV and I give them threw my Hickman line, this means at least I can use medication to help me cope, but the downside to this is it has caused one of the arteries in my liver to clog up. My kidneys are also not in the best condition as I am dehydrated constantly.

-then there’s the conditions that I have got because of crohns disease, things like osteoarthritis in my knees from prolonged steroid use, gastro-paresis from not using my stomach in so long, chronic pain syndrome, anxiety from spending all my time in hospital, these are to name but a few. 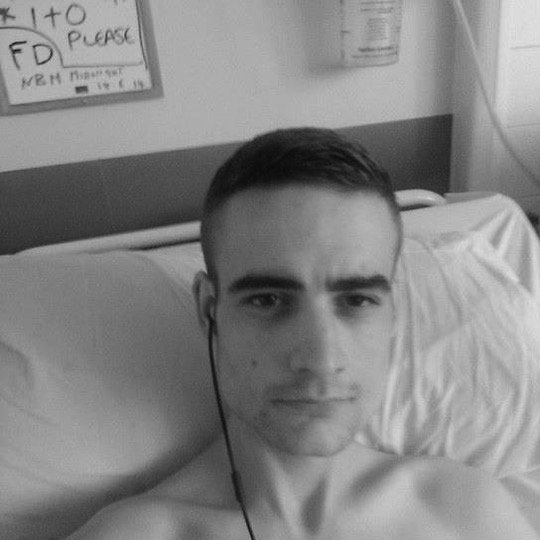 -it’s not just these physical conditions I have to deal with and fight everyday, there is also a mental battle raging inside me all the time, not been able to eat a meal in 2 years, or only been at home for 4 weeks in the last 18months, been away from my family and friends, seeing what my illness does to them has a massive effect on my mental state of mind.

So the next time someone says to me “well you look perfectly fine, why are you using that disabled toilet, or parking in that disabled spot, your conning the system, your not disabled, you don’t need that walking stick” just stop and think maybe I just want TO BE FINE or to feel normal, you don’t no what I go threw on a daily basis and you have no right to judge me just on your perception of me that you can see because you don’t no what goes on inside…..so stop and think before you speak, think about the struggle I’ve gone threw just to get out of bed and get dressed and tried to look ‘normal’…..

Sorry for the super long post but I needed to rant :)”

The great thing is that, since Ste’s post went viral, he’s received tons of messages of encouragement and support. Please continue to pray for Ste, as this disease is something he will have to manage for his entire life -- there is no cure.

He’s not looking for anyone’s sympathy, just for people to take a pause before jumping to conclusions about others. Looks can be very deceiving, and this is a great reminder that you never really know what’s going on behind the scenes. And that’s exactly why we need to extend grace to all those we meet.

Here’s another great story about a mom who judged a teen boy a bit too quickly!

What they said about being homeless is truly touching!