Typhoon Haiyan was one of the worst storms to ever hit the Philippines, claiming an estimated 10,000 lives. 23 year-old Jonathan Fitzpatrick didn’t know if he would survive. He barricaded himself in a room at the Ormoc Villa Hotel on Thursday as 74 mph winds barreled through outside. But he didn’t stay inside. He ventured out to help those in need. 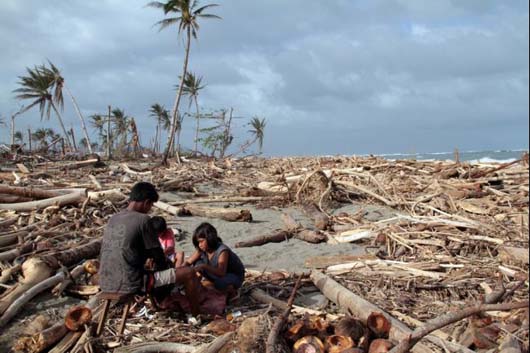 “He admitted he thought that was going to be it,” Jonathan’s sister, Rachel, said. “But he decided he didn’t want to go like that, and he wanted to go fighting.”

Jonathan Skyped with his family, but mid-conversation, the storm cut off the connection.

Instead of staying inside where it was safe, Jonathan and four of his colleagues kicked down hotel room doors, shuttled people to the stairwell to seek refuge and handed out waters. He risked his life to save the lives of complete strangers.

Not only did he save people from the storm itself, but before he left he gave money to a man to help rebuild his home. According to authorities, approximately 9.7 million people in 41 provinces were affected by the typhoon. No buildings were spared.

"I don't believe there is a single structure that is not destroyed or severely damaged in some way -- every single building, every single house," U.S. Marine Brig. Gen. Paul Kennedy told the Associated Press after taking a helicopter flight over the city.

People fear that the area will be overrun by violence. Almost no aid is being given to those in the Philippines.

If you would like to help, PLEASE visit this page: How to Help in the Philippines