A Baaad Sheep Wandered Away And Got Lost. What Happened Next Reminded Me Of Why I Need JESUS! 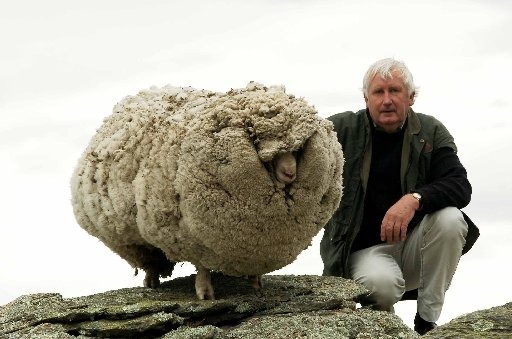 This is Shrek the sheep. He became famous several years ago when he was found after hiding out in caves for six years. Of course, during this time his fleece grew without anyone there to shear (shave) it. When he was finally found and shaved, his fleece weighed an amazing sixty pounds. Most sheep have a fleece weighing just less than ten pounds, with the exception usually reaching fifteen pounds, maximum. For six years, Shrek carried six times the regular weight of his fleece, simply because he was away from his shepherd.

This reminds me of John 10 when Jesus compares Himself to a shepherd, and His followers are His sheep. Maybe it’s a stretch, but I think Shrek is much like a person who knows Jesus Christ but has wandered. If we avoid Christ’s constant refining of our character, we’re going to accumulate extra weight in this world—a weight we don’t have to bear.

When Shrek was found, a professional sheep shearer took care of Shrek’s fleece in twenty-eight minutes. Shrek’s sixty-pound fleece was finally removed. All it took was coming home to his shepherd.

I believe Christ can lift the burdens we carry, if only we stop hiding. He can shave off our ‘fleece’—that is, our self-imposed burdens brought about by wandering from our Good Shepherd.

“Come to Me, all you who are weary and burdened, and I will give you rest. Take My yoke upon you and learn from Me, for I am gentle and humble in heart, and you will find rest for your souls. For My yoke is easy and my burden is light.” Matthew 11:28-30