A Nervous Little Boy and His Stuffed Wolf Gets a Sweet Surprise During Surgery - So Touching :)

Sometimes, doctors may lose sight of the fact that every patient they have is a human being with worries, hopes and dream. But then, there are some doctors, who really get it.

One doctor just like that treated a little boy with such kindness, it'll touch your heart. 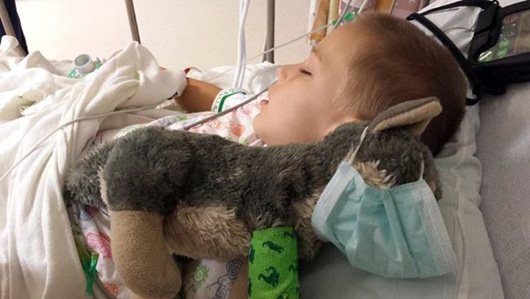 9 year-old Joshua Wade had a procedure scheduled for the Children's Hospital Colorado. He was getting an endoscopy, but he was nervous so he brought along his stuffed wolf.

While he was waiting for the procedure, he asked his doctor pediatric gastroenterologist Christine Waasorp Hurtado, if his stuffed wolf could also have surgery. His best friend had a little tear in his leg.

"His parents said, 'No, no, no, they don't do wolf surgeries here,'" the doctor said. "They said they'd get him fixed up at home."

But, Joshua's parents received a surprise when they walked into the recovery room to see their son after surgery.

"As I walked into recovery I saw my sweet boy still asleep...on his tummy was that little wolf. It had been given a surgical mask and a leg cast. Upon further inspection, I observed that he had approximately 5 or 6 surgical quality sutures," Joshua's father, Kevin Wade, wrote on Facebook.

The doctor gave the little boy's wolf a proper surgery, stitching up his leg, giving him a cast and letting him recover alongside his best friend.