Hundreds of Employees Go Bald for a Good Cause!

This awesome company shows us that employees who go bald together, make a difference together! 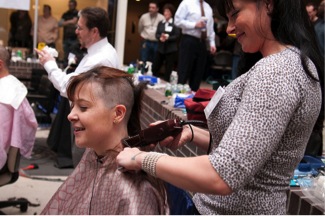 Nearly 430 people at Granite Telecommunications in Massachusets had their heads shaved in their office, raising more than $2 million to support cancer research. 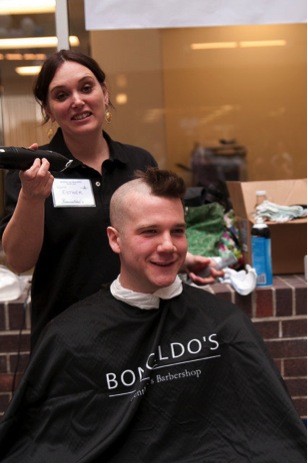 It started as a lark when CEO Rob Hale dared one of his employees, who had a Duck Dynasty style beard, to shave it off for charity. That joke turned into something bigger than either man could have dreamed.

Rob sent an email around saying that he'd donate money for anyone who agreed to shave his or her head for cancer. When nearly 100 stepped up, Rob doubled the amount to $2,000 a head. When the number climbed to 300, Rob's mother stepped up to the plate, pitching in an additional $1,000 each, for a grand total of $3,000 a head.

The number of employees and donations amazingly kept climbing until before they knew it, the total was at $2 million! 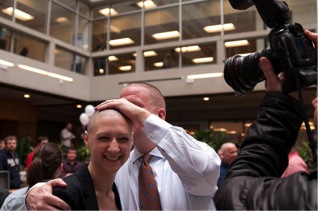 Almost two-thirds of the male employees at the company participated in the shearing ceremony, as well as 20 women who either went bald or cut and donated pigtails for Locks for Love. 18 local barbers got in on the act, donating their time and supplies.

"It speaks to a team that's caring compassionate, bold, energetic; I hope we are all those things and I think we showed that," Rob said. "The other truth, cancer affects everybody… nearly everybody who was doing was doing it support or to memorialize someone who has fought or is fighting cancer."

All in all, these employees did something bigger than themselves that reached far beyond the confines of their own building. "It was a really an electric couple of hours," Rob said. 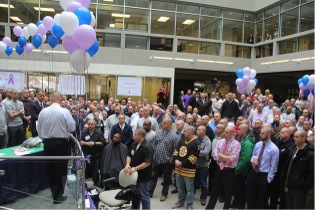 God bless these selfless people who jumped at the chance to put aside their own egos for the opportunity to help others!