Paramedics Save a Rejected and Freezing Pit Bull 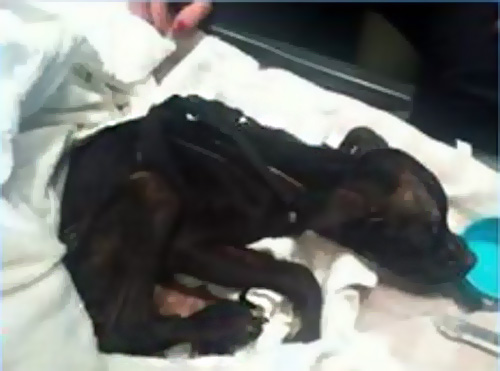 In Buffalo, NY, a small pit bull puppy nearly died in the freezing cold... but luckily this pup found a way to have a happy ending.

The pit bull puppy was left outside of an animal hospital by its owner. The shelter was closed, so no one was there to take the puppy in. Two paramedics happened to drive past Dr. Hector Anderson’s Inner City Animal Hospital and they noticed the freezing, malnourished puppy shivering on the hospital's door step.

“As my partner was pulling into the driveway, all of a sudden, she started going, ‘Oh my God! Oh my God!’ It was, like, 32 degrees outside, and she was skin and bones,” said EMT Norine Hoch. “If we [had gotten there] seconds later, she would probably would have been frozen to death.”

The paramedics knocked on the door, attempting to warm the puppy up by bringing it inside, but they were turned away by the cleaning staff of the hospital. The two women were shocked that they couldn't even bring the freezing six-month-old dog inside to warm up, but that didn't stop these two heroes from saving the puppy. They wrapped the dog in blankets and held it close as they rushed the puppy to the SPCA. It was so weak it couldn't even lift its head.

Field supervisor Michael Arquette said, “It was very heartbreaking to see just how thin, weak, and how cold she was to the touch. They were very saddened, but very happy to see us bring the puppy in, instead of just leaving it there.”

They named the puppy Metro and left her in the caring hands of the SPCA. She is still in critical condition, but she is warmed up and is now eating. Thank you to the kind hearted heroes who made sure the lost and dying puppy wasn't left outside in the cold, you truly are guardian angels!