When You Understand How Christ Was Like This Rag Man You Can't Help But to Love Him More. 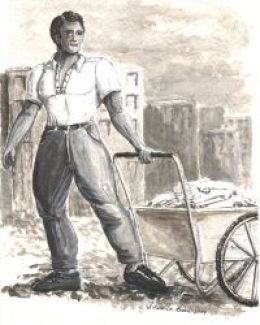 Early one Friday morning, I was walking through the streets of the town and I came across a giant man, 6 feet, 4 inches tall, pulling a cart filled with rags. Although they were but scraps of clothes, they were clean and bright, as was the peddler, calling out the wares... "Rags!" "Come get your Rags!" Clean, new Rags!" "I'll take your old ones and trade them for new!"

I was very curious to see such a sight - not that I had never witnessed people trying to make a buck on the hard streets, but this fellow seemed so hardy and strong. Certainly, he could find work doing something other than pushing rags? I decided to follow him at a distance to see what he was up to.

At his first stop, he came across a sad woman, crying on the stoop of her apartment building. She held a stained scrap of cloth to her face as the man approached. He stepped over garbage and broken toys and offered the woman a clean handkerchief. As he did so, her tears dried up and her entire face brightened. But as he walked away, the Ragman, began to sob uncontrollably. He wiped his face with the old dirty cloth that he had taken from the sad woman on the porch. I shook my head in wonder.

The Little Girl and the Rag Man

The next person that the Ragman came upon was a little girl. Her head was wrapped in a bandage that was dark with blood. As the Ragman approached, she lifted her eyes and asked for a lovely hat to adorn her head.

How could he resist?

He reached into his bag and pulled out a yellow bonnet that would fit her just perfectly. Before he laid it on her head, he unwound the bandage from the girl's head and placed it around his own.

As he did so, a thin stream of blood emerged from his own head and trickled down his cheek. He didn't mind at all as he placed the cheery hat upon the girl's head and went on his way. Happiness crossed her face for the first time in many days, and the Ragman staggered into the street. 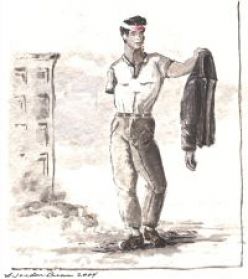 The Worker and the Rag Man

By this time, the sun had moved to a high point in the sky and the Ragman looked up and grew worried. He started to move more quickly and with a greater purpose.

Eventually, he came to a man leaning against a telephone pole. "Can I offer you clean clothes for work?" the Ragman offered. The other man sneered and laughed. How can I work, when I have only one arm, and he lifted his jacket away, showing the empty right sleeve. The Ragman simply said, lets exchange coats.

What happened next, I still cannot believe. The Ragman removed his jacket and with it came his right arm. He handed it to the man at the telephone pole, who gladly put it on and walked away whole and happy. The Ragman kept going, this time, a bit more slowly. 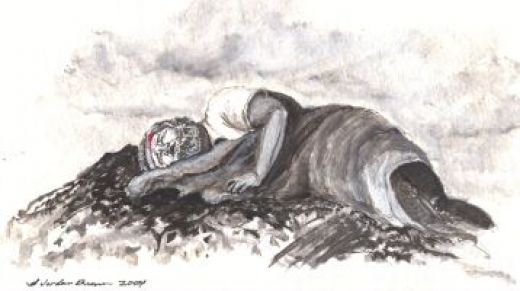 The Drunk and the Rag Man

The Ragman hurried down the street. Before long, he came up a drunk, huddled upon the edges of an overpass, covered in a blanket, the stench of which I simply will not relate here. It did not phase the Ragman, however. He lifted off that awful rag from the drunk and gave him brand new coverings.

Immediately, the man stood up and walked away with a strength and purpose not seen in years. The Ragman stumbled and fell with the burden of the old cloths. Still, he moved along, even more urgently that afternoon.

He moved through the streets, crying, bleeding, pulling his cart with one arm, and stumbling along through a haze of drunkenness. He was in such a hurry, I could hardly keep up with him! Eventually, he reached a garbage pit. The Ragman climbed to the top of the landfill and laid out a large blanket. He fluffed up his jacket and laid his exhausted head on the top. The Ragman laid down, closed his eyes, covered himself with the drunk man's army blanket, and died.

Oh, how shocking and terrible! I was not expecting this at all. I slunk away to my bedroom and cried myself to sleep. I had come to love the Ragman, and yet, he had seemingly died alone.

I was so distraught, I slept all the way through Friday night and Saturday too. All of a sudden, I was awakened on Sunday morning by a bright light! This amazingly hard, pure, shocking light came streaming into my room that day, I could hardly open my eyes. When I did, I had to blink several times. Yet, still I did not believe what I saw.

There, standing before me was the Ragman! The only sign of his suffering the days before was a small scar on his forehead. Other than that, he was entirely intact!

I could not believe it, and was filled with shame. I lowered my eyes and my head and hesitantly approached the Ragman. Stripping myself of all my clothes, I stood before him, naked. "Please," I implored him, "Dress me." The Ragman turned and chose one of the many shining cloths next to him. The entire room was filled with His glory! He dressed me, then, my Lord, that day.

With new rags, I am a wonder beside Him – The Ragman. The Christ!

He is not here; he has risen! Remember how he told you, while he was still with you in Galilee:  'The Son of Man must be delivered into the hands of sinful men, be crucified and on the third day be raised again.' Then they remembered his words.