Woman Miraculously Survives A Freak Accident At The State Fair

How Her Life Changed At The State Fair

A lot of times, you'll hear people say, "I'm not the same person today that I was before." But for Andrea Vellinga, those words are no metaphor. She miraculously survived a freak accident at the Indiana State Fair five years ago. And she truly is not the same person today that she was then. But hearing how God is working in her life is awe inspiring!

Freak Accident At The State Fair

It was meant to be a fun day at the State Fair celebrating Andrea's 30th birthday. A friend had given her tickets to the fair to go see her favorite band -- Sugarland. But a huge storm blew in just as the concert was about to start, bringing with it fierce wind gusts that sent the stage equipment toppling off the stage and onto the crowd below.

Andrea was one of those unfortunate enough to get hit by the falling equipment. A huge stereo speaker fell right on her head. She was found laying on the ground with her skull crushed, barely breathing. But unlike the other 7 victims that day, Andrea miraculously survived.

Andrea doesn't remember any of it. She was in a coma for six weeks and awoke to a nurse carrying in a beautiful bouquet of roses, saying, "These are for my miracle patient."

“This is literally like being born again,” she said. “I had to learn how to talk, walk, eat, all that stuff. Really everything, I’ve had to learn again.”

But our God can use anything -- anything at all -- for His good!

RELATED: A shark attack led to the life-saving discovery of this man's tumor

Changes To The Body

Naturally, there were many physical challenges for Andrea to overcome after the accident. She's had seven surgeries and multiple procedures to replace the missing piece of her skull. She can move her left arm, but it's essentially useless. So, she's had to learn to do everything one-handed.

While the medical changes are to be expected, it was the psychological changes that were more shocking. Andrea woke up in the hospital a different person -- physically and mentally. And her new personality has led to its own set of obstacles to overcome.

Changes To The Mind

Andrea now struggles with parenting decisions, often having to remind herself to be a mom and not a friend.

Her marriage also came to an end as a result of the changes to who she is.

Andrea with her family before the accident Credit: Dateline NBC

Andrea cries more easily than she used to. On her bad days, she gets angry and frustrated. She gets tired a lot, and requires frequent naps. Her speech is slower than it used to be, and she sometimes repeats herself.

But not all of the changes are bad, and God has been making a way for Andrea since that tragic day at the State Fair.

RELATED: A family remains faithful after a freak accident nearly kills their son

Andrea has embraced her new life. She keeps moving forward.

Andrea doesn't let what happened hold her back from doing what she loves. She still goes to concerts, even ones at the State Fair.

Now a fan of spicy foods, Andrea enjoys going out to eat with friends. She received a settlement after the accident, which she calls a blessing. She works two days a week at the YMCA, and is currently training for a half-marathon. And the race is a stark reminder of just how far she's come!

RELATED: 2 years after a woman set her on fire in a fit of jealousy, her recovery is miraculous

The half-marathon that Andrea will run next month is the same one she was training for when the accident at the State Fair happened. She trains at MyTime Fitness, the same gym where she trained 5 years ago.

And given the seriousness of her injuries, it's more than just amazing that she will be running -- it's a miracle.

"Very few people do a half-marathon," said Breck Vining, one of the nurses who cared for Andrea after the accident. "And to run post a very severe brain injury, it’s just awe inspiring."

Doctors say it the drive and endurance Andrea learned from running are the very reason she's come so far in her recovery. In fact, as a means of motivation, Breck actually told Andrea they would run together one day.

It's a promise she's proud to fulfill next week, when she will run the half-marathon along with Andrea. The race just goes to show how things have come full circle. And it's an accomplishment that has everyone inspired!

RELATED: Couple celebrates their 57th wedding anniversary by running a marathon together

Through all of the changes that have come after that fateful day at the State Fair, the biggest and best is Andrea's own relationship with God.

"My faith has skyrocketed since the accident," she said.

It's through Him that Andrea has found the strength so many admire.

“I have God to thank. I’m here because of him the way I was rescued, I mean, God has been with me,” she said.

It's easy to focus on the pain and struggle that has come from the tragic incident. In fact, Andrea's mother still asks the question -- why? It's a question that so often shakes our faith. . . if we let it.

"And then I stop and I think. I think it happened because God definitely had something more for her," Andrea's mom, Sandi Voss, said. "A lot of people's lives changed because of that. I think God makes good out of bad situations if you let him. I just think that’s why it all happened."

We'll never fully understand the why. But it's clear God has a bigger purpose for Andrea. He has a purpose for each of us. And He asks us only for faith the size of a mustard seed to make great things happen!

"Because you have so little faith. Truly I tell you, if you have faith as small as a mustard seed, you can say to this mountain, 'Move from here to there,' and it will move. Nothing will be impossible for you." Matthew 17:20

This sweet baby survived being born with no kidneys, and it’s a true miracle! 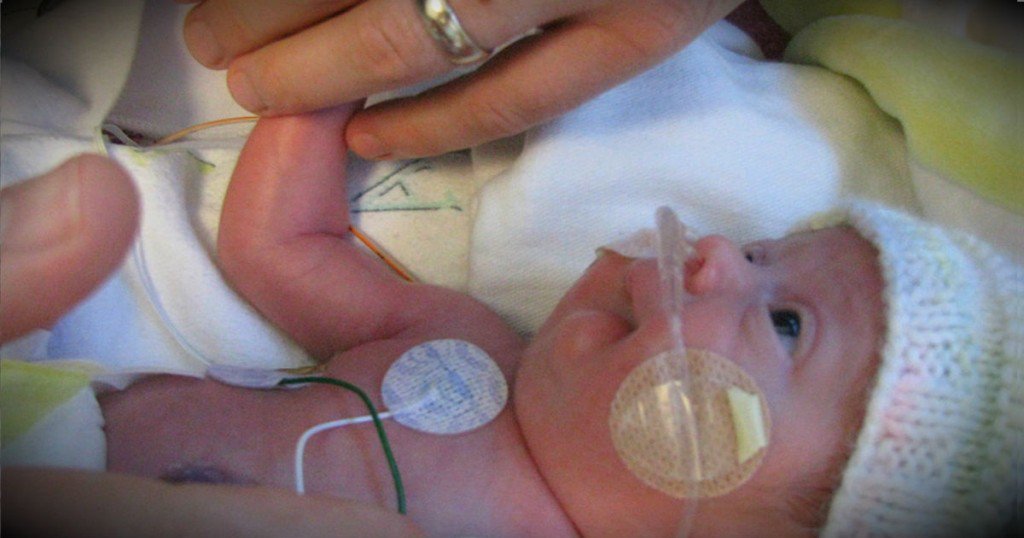