This little girl was in for a miraculous surprise and it was all caught on video. She was at the doctor’s office with her mommy for a special visit and she is not going to leave the same way she came. A procedure had been done to correct her eyesight, so they were there to have her bandages removed and test her sight.

Her mom is also anxious because life as they know it is about to change. She holds her baby girl in efforts to comfort her while the doctor continues to uncover her eyes.

The doctor tries to sing to her to calm her down. Finally, the tape is all off! While she composes herself, she sits still for a second then opens her eyes a little. Once her eyes adjusted to the light she looks around, and realizes she can do something she has never done before- she can see.

She scans the room and looks at her mom while using her beautiful eyes to see for the first time. Her mom begins to cry because of the miracle that just took place! Now her beautiful little girl can see the entire world!

Girl Sees for the First Time

9-month-old Nathan Byrne is a miracle. Even doctors can't believe he's alive. This little warrior battled all kinds of medical scares, including a high-risk operation where surgeons stopped this miracle baby's heart for 15 hours! 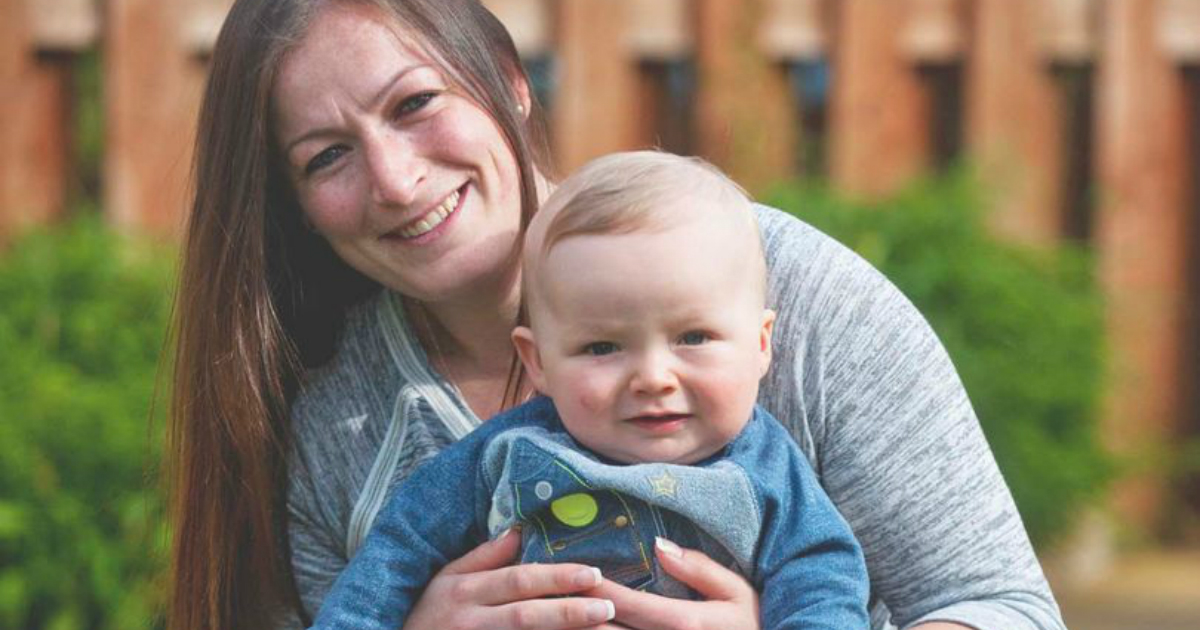 A Fight From The Start

Nathan's battle started at birth. His mom, Lesley, had been in labor for 9 hours when Nathan's heart rate started plummeting.

Doctors performed an emergency c-section, and Nathan was lifeless when they pulled him out. It took several minutes to get him breathing again.

By four days old, doctors gave Nathan's parents -- Lesley and David -- some terrifying news. Their baby boy suffered from a rare condition called tetralogy of fallot – a combination of problems including a large hole in his heart and a narrowing of the pulmonary artery.

RELATED: Miracle baby smiles after he's born with half a heart

Nathan was well enough to go home with his mom and dad. But doctors warned he'd have to undergo serious heart surgery, which involved stopping his thumb-nail sized heart in order to repair the defects from birth. Otherwise he'd die.

The plan was to wait until Nathan was 6 months old, giving him time to grow and get stronger. But things didn't work out that way.

A series of respiratory infections plagued the baby boy. For weeks, he suffered constant spells where he would go blue and limp. It was agony for his parents.

“The scariest thing was putting him to bed because we didn’t know if was happening in his sleep,” Lesley recalled.

So, at just 3 and a half months old, doctors determined they could wait no longer to operate. Doctors planned to close the large hole in Nathan's heart, then do some rewiring so it could function normally.

The surgery was supposed to take 7 hours. But after a string of complications, it wound up running more than twice as long. And that meant doctors stopped this miracle baby's heart for 15 hours!

“It was just one thing after another," Lesley said. "I remember saying to the doctors, ‘What’s happening, is he ever going to get better?’”

RELATED: Miracle baby with feet the size of pennies overcomes many complications, including meningitis

Each time the surgeon's tried to take Nathan off the machine that was keeping him alive during surgery, his heart and lungs stopped working. As a result, even once the operation was complete, doctors were forced to leave Nathan's chest open so they could hook him up to an ECMO (extracorporeal membrane oxygenation) machine, which circulated his blood outside his body for three days. The idea was to give his organs time to recover.

It was an extremely risky move. Doctors warned Lesley and David the ECMO life-support machine could cause severe bleeding to Nathan's brain or a stroke. But since this was his best chance at survival, his parents gave the go ahead.

One Thing After Another

Nathan's odds kept getting worse as more and more complications arose. He developed blood clots in his brain, which kept causing seizures lasting anywhere from four to 45 minutes. The doctors used morphine to help manage pain, but the infant suffered severe withdrawal symptoms as he came off it.

He even battled a bowel infection that left the organ “on the verge of bursting.” The treatment required starving Nathan for 10 days.

The poor child was so sick, doctors actually started running out of room in his tiny body for the tubes and wires necessary to save his life. 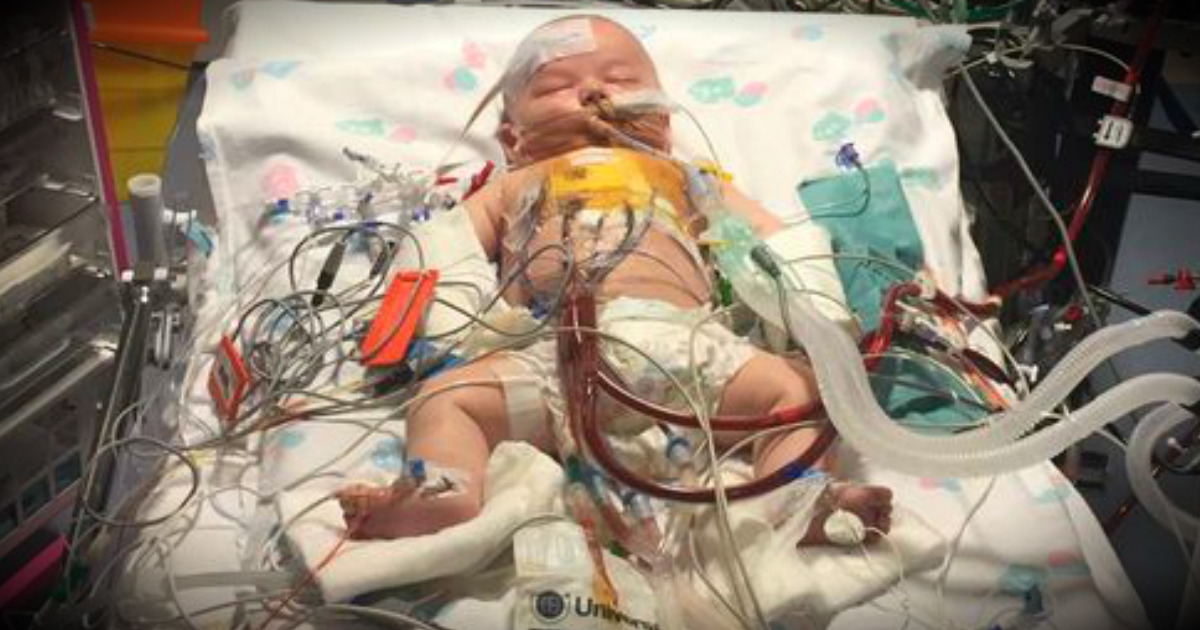 It got so bad Nathan's parents were advised not to leave the hospital, for fear he'd pass away at any given moment.

Even so, his mom remained faithful that her son would survive.

“It never crossed my mind that he wouldn’t come out of surgery," she said. "It probably should have but I just thought, ‘They can fix his heart’."

RELATED: Miracle baby baffles doctors when she's born with more water in her body than blood

What was supposed to originally be a three week stay at the hospital turned into three months of fighting for life. And then, a miracle happened.

“For six or seven weeks, we couldn’t see an end to it," Lesley explained. "Then one morning we came in and he just looked different. He still had the ventilator taped to his mouth but he tried to smile and I knew he was going to come off it.” 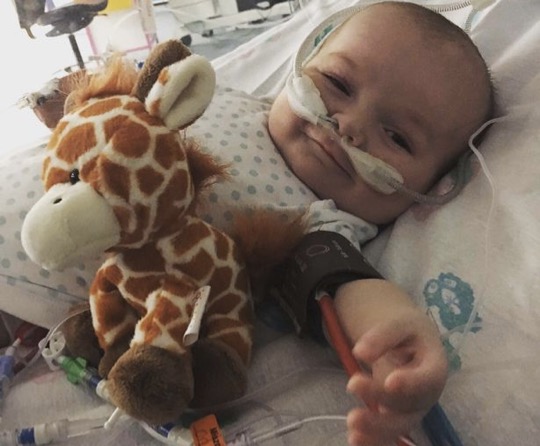 After suffering for so long, things suddenly turned around for this little angel. The little tike is full of life!

“To look at him, you would never know what he’s been through," Lesley said. "He has so much energy and never stops smiling. It is amazing he still does that, considering all that he has been through."

Nathan's recovery is a complete miracle. With God's guidance, doctors played a large role. But eventually there was nothing more they could do. And that's when God stepped in. He clearly has a big plan for this little angel!

YOU MAY ALSO LIKE: Miracle baby born with an adult-sized head defies all of the doctors' expections 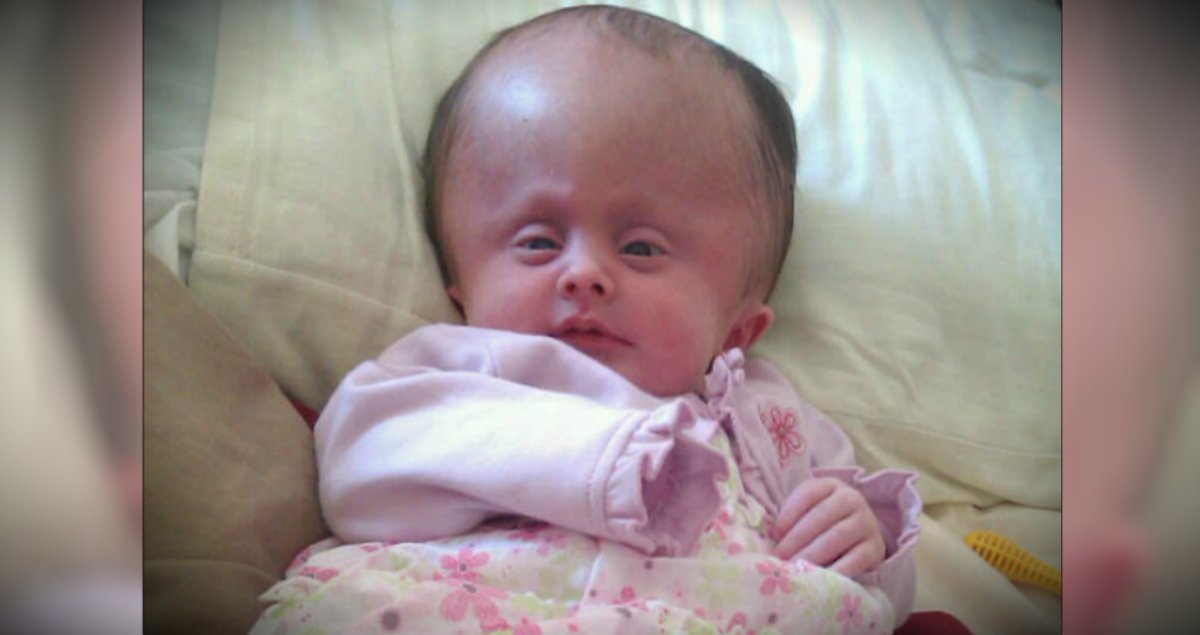 November 14, 2017
Grumpy Old Man On A Mission To Save Christmas Gets A Big Surprise