8 Year-Old Selflessly Asks Santa to Help His Twin... So Heartwarming.

A financially struggling single mother, Karen Suffern, decided to get a jump start on her kids' Christmas list. She has twins to buy for, so scraping up money can take time.

So when she asked them to write a letter to Santa, she never expected to read something so touching. 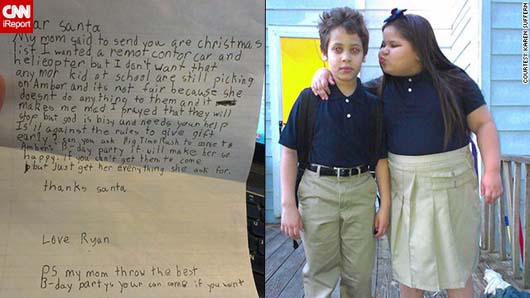 Ryan, her son, wrote his letter from the heart, although it started off normally enough:

"Dear Santa ... I wanted a (remote control) car and helicopter, but I don't want that anymor. Kid at school are still picking on Amber and its not fair," he wrote. "I prayed that they will stop but god is bisy and needs your help."

Karen was overwhelmed with emotion. Her daughter Amber, who has attention-deficit (hyperactivity) disorder and other mental and mood disorders, never mentioned the teasing. She is an emotional eater and is almost twice the size of her twin.

Her mother never realized just how much the kids picked on her at school. With the help of Ryan's selfless letter, Karen is making more attempts to rectify the bullying situation at school, to help protect her daughter and to make sure she develops Amber's self-image.

"If my kids don't call names and pick on others, I would expect other parents to teach their kids to be respectful, too," she said. "There have been times my kids would point at others and say, 'why is her hair so strange' and things like that, and I would say, 'You know, people are different, and that is just the way they are.' "

"I understand that sometimes schools try to do as much as they can, but bullying doesn't have to physical; name-calling and putting someone down are considered bullying to me."

Protect your children from bullies and teach them understanding, kindness and love. Bullying needs to be stopped, both in the classroom and online.

God bless young Ryan for watching out for his sister and we pray that Amber finds strength.